The night before I decided to swim with sharks off the coast of Belize’s Ambergris Caye, I got drunk on tequila and traveled the island in a bumpy golf cart. The next day, my judgment was arguably impaired due to the alcohol and pothole-shaken brain.

In the small Central American country of Belize, swimming with sharks is what people do. I mean, it’s totally OK and enthusiastically supported. People pay to go on shark day trips.

When my husband and I set out on our honeymoon, we weren’t aware Belize was surrounded by one of the biggest coral reefs in world. We also didn’t know that you couldn’t swim right off the beach. Belize protects its ecosystem, so in order to swim in the turquoise water, tourists kayak out to the reef, tie off on a buoy and hope Jaws is on vacation.

Let me give you some backstory: When I was a kid, my family went to Myrtle Beach. When you’re a kid, nothing scares you, not even the ocean. As humans, we’re not supposed to be in the ocean. It’s not our natural habitat. Still, we tempt fate and hope to not lose a foot. Well, that day in Myrtle Beach, I have a vague memory of being waved at by a bunch of lifeguards and told to get out of the water because a tiger shark was swimming with me.

As an adult, I became a beach enthusiast while living in Charleston, South Carolina, but I still figured I would, at any time, lose a limb. Then, I moved to Phoenix and developed an anxiety disorder. The underwater monsters got much bigger. Now, take me to Belize, tell me to jump off a boat in open water and watch me pee myself.

The day of swimming with sharks, I was terrified and hung over. My sweet husband, Jake, fed me a cocktail before we got on the boat and we rode about 15 minutes to the Hol Chan Marine Reserve. There is a specific place within the reserve called Shark Ray Alley. It’s the place where fishermen used to clean their nets before returning to port, so now, sea monsters congregate and hope to be fed tourists.

Our guide was this wild island native who’d been doing dumb things his whole life. Dumb as in swimming with sharks. He pulled our boat over the crystal clear water of Shark Ray Alley, and that’s when I saw… them. First, they were just black shapes. I could hear the Jaws music in my head: duhn-duhn, duhn-duhn. Then, I noticed the sharks weren’t alone. Stingrays the size of pterodactyls were everywhere. 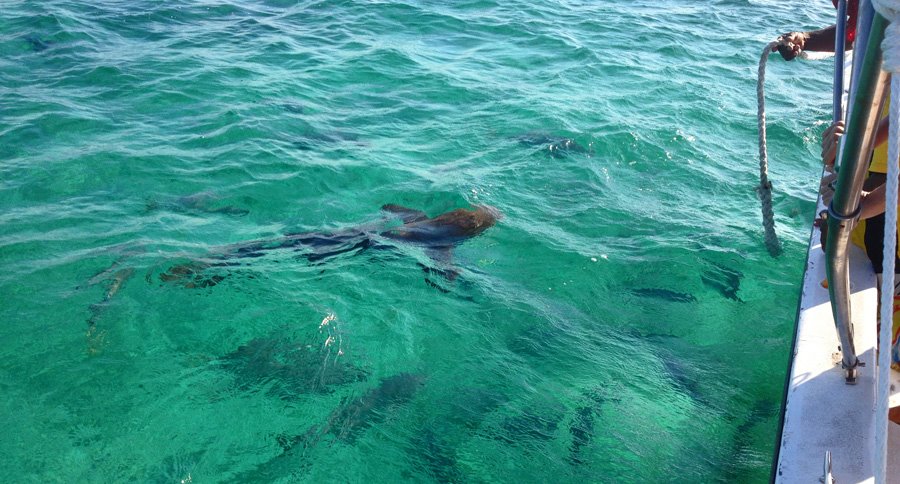 What? I’m sorry, you want me to what? I considered my options. The trip wasn’t free, so I didn’t want to tick Jake off about buying a boat pass and then bailing. Plus, what better place to die than Belize, right? The guide jumped in, and I followed.

The water was like a lukewarm bath. It felt silky. I adjusted my snorkel so I could at least see the shark before it bit my leg off. But then, I saw something incredible. A school of stingrays swam below me in V formation like a flock of ducks. Something primal in me reached out and grabbed one, and off I went! I was riding a flippin’ stingray!

Soon after, I found myself petting a Nurse shark’s stomach. Nurse sharks are considered mostly harmless, but they still have those spooky, black shark eyes. Their stomachs feel slimy. I’m a good swimmer, and I’d obviously lost my mind, because I started going down deep so I could swim side by side with sharks who could fit my head in their mouths. I lost track of my husband. I was in love with the fish.

When our guide made us leave, I almost cried. I wanted to live in Shark Ray Alley. How did this happen? How did a girl who used to have SNL Land Shark nightmares become a shark enthusiast? I chalk it up to fear. Fear can be a bad thing. It can keep you from following your dreams, keep you from doing what you really want.

But when fear is conquered, we become superheroes. That’s how I felt that day in Belize. I wasn’t Sara, depressive-anxiety girl. I was Sara, shark tamer! After Shark Ray Alley, I was high for hours. Lights were brighter. Food tasted better. Simply my husband’s hand in mine felt sexy as hell.

When we conquer fear, the world is such an intense place. I firmly believe, thanks to the sharks, that we need to do things that scare us, all the time. Unfortunately, I don’t have a beach nearby, but you better believe: Next time I get a chance to do something semi-idiotic, I’ll be the first to jump off the boat.