Are we losing all the ground our mothers and grandmothers gained for us in the 20th century? Are girls ready to give up equal pay and equality for selfies and sexy time? Say it isn’t so.

But then take another look. You see those detailed, fairly well-constructed thought exercises against feminism and you can’t help but wonder, is this for real? How many drafts did this take? 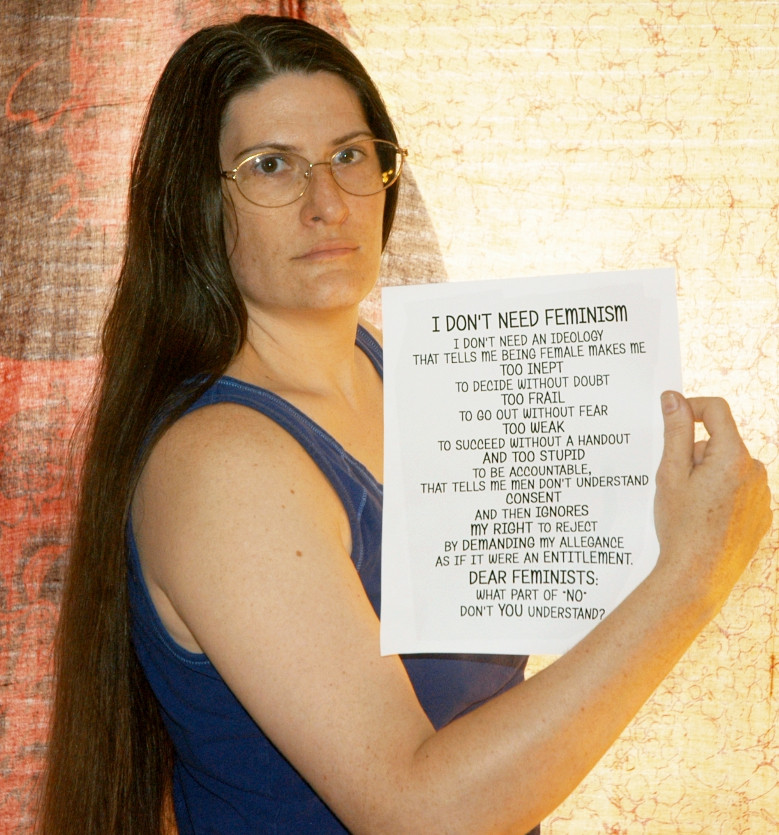 Maybe these women really do have such strong feelings against feminism they just can’t contain it any longer, and this movement was at the right place and time to unleash a torrent of built-up resentment. But nothing about these selfies seems spontaneous or organic. In fact, very little of the content in the notes is about the women at all. It’s about defending men and protecting men and their rights from feminists. 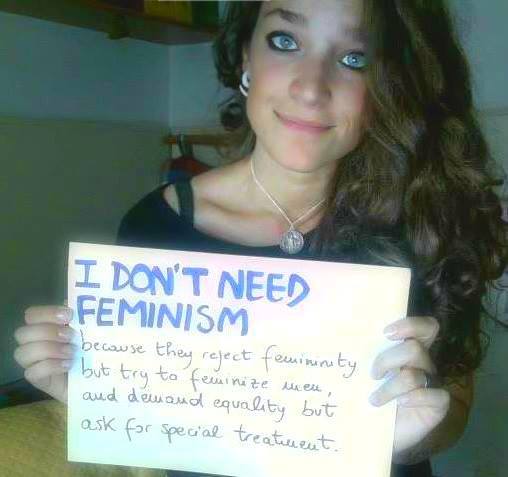 “I don’t need feminism because they reject femininity and try to feminize men, and demand equality and ask for special treatment.”

Even if this girl really believes this, is this such a big injustice to this girl that she just had to take to social media to have her views heard? Seems pretty unlikely.

Now take a look at this text from The National Center for Men website under “Our Issues.”

“In many ways women receive special privilege and protection while male pain and suffering are trivialized or ignored by our society.”

How about this defense of Women Against Feminism from Mensactivism.org:

“Sure, some Women Against Feminism claims are caricatures based on fringe views — for instance, that feminism mandates hairy armpits, or that feminists regard all heterosexual intercourse as rape,” their website says on its homepage. “On the other hand, the charge that feminism stereotypes men as predators while reducing women to helpless victims certainly doesn’t apply to all feminists — but it’s a reasonably fair description of a large, influential, highly visible segment of modern feminism.'”

Now take a look at this #WomenAgainstFeminism post where this poster, a young girl, denies she is a victim: 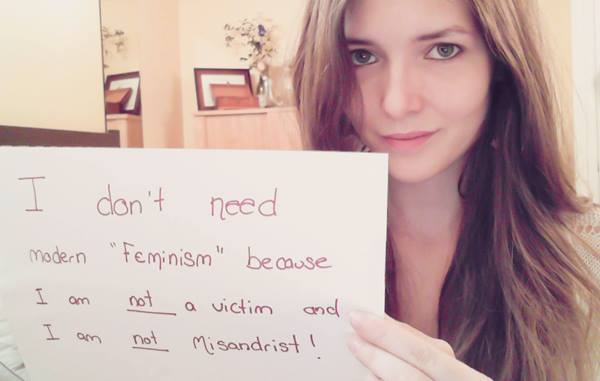 “I don’t need modern ‘feminism’ because I am not a victim and I am not a misandrist,” she writes.

Misandry, if you don’t know, is a common term used by men’s rights groups to describe men’s discrimination.

Terry O’Neill, president of the National Organization for Women sees many other similarities between the messaging of #WomenAgainstFeminism and men’s rights activists. She starts by pointing out that just about every one of the bullet points posted in the anonymous #WomenAgainstFeminism manifesto is written from a male perspective. She adds that the sections about rape culture and inflated rape statistics are something that men’s groups are generally more concerned about than women, because they are worried they will be unfairly accused. She adds, that accusations of false rapes track at about one percent of reported instances, comparable to other crimes.

“This is pretty uniquely a male thing, O’Neill adds; “That’s why I think it’s written by men.”

O’Neill goes on to admit that in her 20s and 30s, especially in law school, even she was reluctant to identify as a feminist.

Although she came around later in life to fully embrace the feminist label, she adds that for women who genuinely reject feminism, supporting that right is a feminist responsibility. So even though she has serious doubts that it’s legit, if these girls really have taken to the internet to express their dissatisfaction with feminism, she says, more power to them.

“Look, you get to define yourself,” O’Neill says. “You get to say who and what you are.”

#WomenAgainstFeminism is an anonymous organization and has not responded to questions about their relationship to the men’s rights movement or whether any of their content has been created by men.