Since the release of Snow White and the Seven Dwarfs in 1937, Disney has repeatedly cast a negative light on stepmoms and women without children, often rendering them as heartless, vindictive villains. The release of Disney’s latest film may change all of that.

t Disney’s Maleficent is the retold story of Sleeping Beauty and tells a much different tale than the 1959 original. We sat down with two bright teens to get their thoughts on the film and the softer side of Maleficent herself.

Can you name some fairy-tale villains?

t Emma: Of the many fairy-tale villains I know, the ones that stand out to me are Ursula, Cinderella’s stepmother and Cruella de Vil.

Who are the worst and why?

t Sadie: In my experience the worst villains are the ones with no real foundation for destruction other than to cause pain and/or gain power.

What do they have in common?

t Emma: They all have a strong desire for power and some of them seem to have an unhappy or lonely life, usually starting in their youth.

Do you know who Maleficent is? If yes, describe her. Is she a good or bad person?

t Sadie: I know the story of Sleeping Beauty so I knew of her, but up until a couple weeks ago I hadn’t known her name.

What makes her a good/bad person?

t Emma: I had only known her as the “evil” witch who cursed Aurora, so to me she was a bad person.

What do you think made her so angry?

t Sadie: I was young, and I never considered what could have made her this way, she was always just “wicked.” 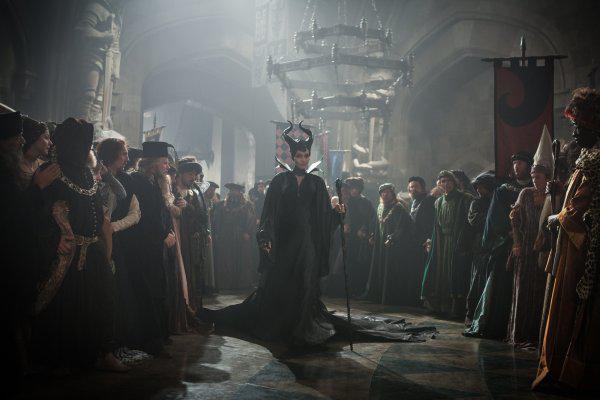 How did Maleficent treat Aurora?

t Emma: At first Maleficent took out all her anger on Aurora by cursing her and hating her, but after realizing that she was a great person, Maleficent loves and cares for her.

How would you describe Maleficent now?

t Emma: Before seeing the movie I had formed a strong opinion about Maleficent based only on the bit of information I had, but I didn’t actually know the reasons for her wrath and “evilness.” After actually watching the movie, I realized that Maleficent is actually a good person/fairy and was only “evil” because she was hurt so badly by the person she loved.

How does she rate against other fairy-tale villains?

t Sadie: I don’t even see her as a candidate for comparison because I don’t think that she’s a villain.

So what makes a good fairy turn into a bad one?

t Emma: I think Maleficent turned in to a “bad” fairy because she was betrayed and hurt by the person she loved, and she wanted to get revenge.

If you were Sleeping Beauty, what would you have said when you found out she put the curse on you?

t Sadie: I would have been confused at the kind way she had been treating me and if I thought that her kindness wasn’t a facade I would ask for her side of the story and what we could do to break the curse.

Did you feel badly for Maleficent during the movie?

t Emma: I felt bad for Maleficent during the movie because she had been hurt by Stefan, the one person she loved and after that she was left without happiness or peace.

What do you think Maleficent wants for her life?

t Sadie: I think that she just wants love and for her world to be left in peace.

What would you change in her life to make her nicer? What would make her happy?

t Emma: A life with peace and no conflict between her and the neighboring lands would make Maleficent happier, which is what she ends up achieving in the end.

After the movie, would you want her as your fairy godmother? (How come?)

t Emma: After seeing the movie, I would want to have Maleficent as my fairy godmother because she would be great at protecting and loving me. I also think she is a very strong and powerful person and would teach me to be so, too.

t Sadie: Yes, because I know that she would care and fight for me with all she had. Her sense of loyalty was strong and so were her wings.