Flash reviews of The Wolf of Wall Street, American Hustle and four more! 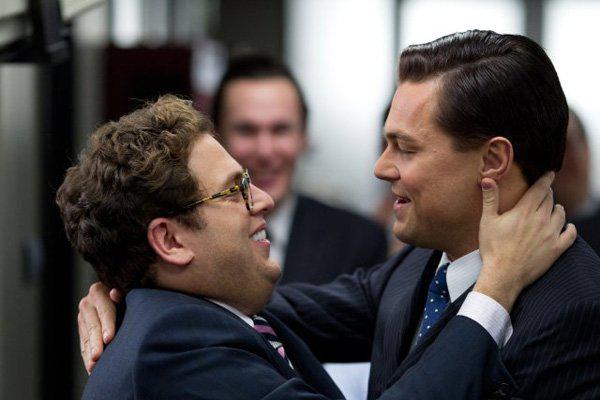 t As a film reviewer, December is one of my busiest months. Not only am I scrambling to keep up with all the holiday cheer, but it’s also the time of year when the studios unleash their biggest and brightest cinematic stars to beat the New Year deadline for eligibility for the Academy Awards.

t Not every flick flaunted here is Oscar bait, but here’s what I’ve seen lately.

t After a somewhat puzzling sidestep into 3-D children’s-movie territory with Hugo, devilish director Martin Scorsese is back with a vengeance in a three-hour crime dramedy that’s one of his best since Goodfellas. Leonardo DiCaprio plays Jordan Belfort, the real-life 1980s Wall Street whiz kid who built his fortune on penny stocks and Steve Madden shoes… and spent his fortune on hookers and blow — literally. That and yachts, helicopters, Italian sports cars… you name it. Jordan Belfort made Gordon Gekko look like Mahatma Gandhi. Based on the best-selling memoir of the same name, this funny, irreverent, poignant, fast-paced and fun flick is well worth the investment. [In theaters]

t Christian Bale is riding the weight-chart roller coaster again. He’s gone from Batman muscle to ex-con bones in Out of the Furnace and back to the fat in American Hustle. But Bale is more than just the sum of his parts. He’s an incredible actor who can embody any role. This time around, he’s Irving Rosenfeld, a swinging ’70s con man with a comb-over and a proclivity for pulchritude. His wacky wife is played by Jennifer Lawrence, and his clever mistress is played by Amy Adams. Bradley Cooper joins the fray as an FBI agent who’s trying to catch a public official on the take. Savvy and stylized — not to mention styled, with period plunging necklines, wide neckties and heavenly hairdos that are to die for — this is one you’ll want to hustle to see on the big screen. And if you love classic rock and old-time disco, you’ll be in DJ nirvana — surely, half of this film’s budget went to licensing songs! [In theaters]

t This stilted period drama is yet another true tale, but it’s far from the excess of the 1970s and 1980s. It tells the story of literary legend Charles Dickens and his young mistress, Ellen “Nelly” Ternan. With their passion quite as restrained as their corsets and tight-fitting frock coats, aspiring actress Nelly (Felicity Jones) and esteemed British author — not to mention, married father of 10 — Dickens (Ralph Fiennes) begin a long-term affair that’s one of the worst-kept secrets in Old London society. The sumptuously filmed and costumed period piece switchbacks in time between Nelly’s recollections of their affair post-Dickens’ death and the moments leading up to and including the relationship. It’s worth a look for the acting and the accoutrements. [In theaters]

t It’s WMD vs. the AARP in Red 2, which re-teams Bruce Willis, John Malkovich, Helen Mirren and Mary-Louise Parker for another round of ho-hum high jinx and stylish shootouts. While I was lukewarm on the first Red film, I’m a fan of the cast — and the second one’s got Catherine Zeta-Jones and Anthony Hopkins — so I decided to see if they’d upped the ante at all. Sadly, the answer is no. The film starts off with our team of geriatric heroes coming back for “one last mission” when it’s discovered that a nuclear weapon has been stolen — and lo, off they go on an international search-and-destroy spree. A barrage of action ensues, including car chases, shootouts, shopping sprees, ticking time bombs, martial-arts mayhem, a high-altitude highjacking and one explosion after another (all punctuated, naturally, with clichéd clever one-liners punctuated by tongues in cheeks). That’s all Red 2 has to offer. [On Blu-ray]

t Though its theme is hardly a happy subject, this thought-provoking Danish drama on the false accusation of child abuse is nonetheless extra-highly recommended. Mads Mikkelsen, who’s perhaps best-known as a Bond villain, is absolutely outstanding as Lucas, a kindly and well-liked kindergarten assistant who is accused of sexual misconduct by a student. By and by, his former friends and colleagues not only turn against him, but in a united front of group hysteria, they pursue him. The result is gripping — there’s more suspense and white-knuckle tension in this study than in 90 percent of the outright horror films released in 2013. It’s like a pared-down McMartin Preschool case (minus the satanic panic and the actual trial). There are moments reminiscent of Sam Peckinpah’s Straw Dogs and Lars von Trier’s Dogville, but most of all, the story sharply illustrates how the embracing arms of family and community can so quickly and wrongly turn to viselike traps and prisons. [On Blu-ray]

t If complex period dramas, three-hour biopics, creaky action flicks and contemplative, subtitled foreign affairs are just too much for you to undertake this dark, cold winter, then sit back in the comfort of your own home, pop some corn, put your feet up and watch some badass chicks beat each other to bloody pulps. The premise of Raze — starring stuntwoman Zoe Bell and Continuum‘s Rachel Nichols — is kind of like The Hunger Games meets Spartacus. Violent beyond belief, bloody and yet a bloody-good time, Raze is a fun one for fans of hard action and well-choreographed bare-knuckle fight scenes. [On demand]