What do a pro basketball player, a dwarf, a mom of three, a woman in a wheelchair and a man who is a double-leg amputee all have in common? They’re the people behind the shapes of JC Penney’s new mannequins, in a Manhattan storefront.

The real-life people posed for the mannequins as part of The Today Show‘s “Love Your Selfie” campaign, as a way to broaden the diversity of body types seen in mannequins. And it’s about time.

Mannequins have been one of customers’ top complaints for years. Two years ago psychotherapist Dae Sheridan started a petition against JC Penney’s tiny mannequins in stores.

“The legs on the mannequin were not just ‘super-skinny,’ they were extraordinarily, shockingly thin. So thin, that the mannequin’s leg was the same size as my arm!” she wrote in her letter to the retailer. Even though she got thousands of signatures in support, the store never responded. And JC Penney is far from the only store with this issue.

Plus-sized stores like Lane Bryant have come under fire in recent years for using “straight sized” mannequins and catalog models even though they sell exclusively plus-sized clothing.

Thankfully, popular fashion-fit sites have sprung up where real women model the fashions and describe how they truly fit, addressing whether they run small, are tight in the arms, don’t work for large chests, length and other concerns.

Yet despite rising anger, stores have stuck with their tried-and-true (and headless) dolls. It’s just not right. 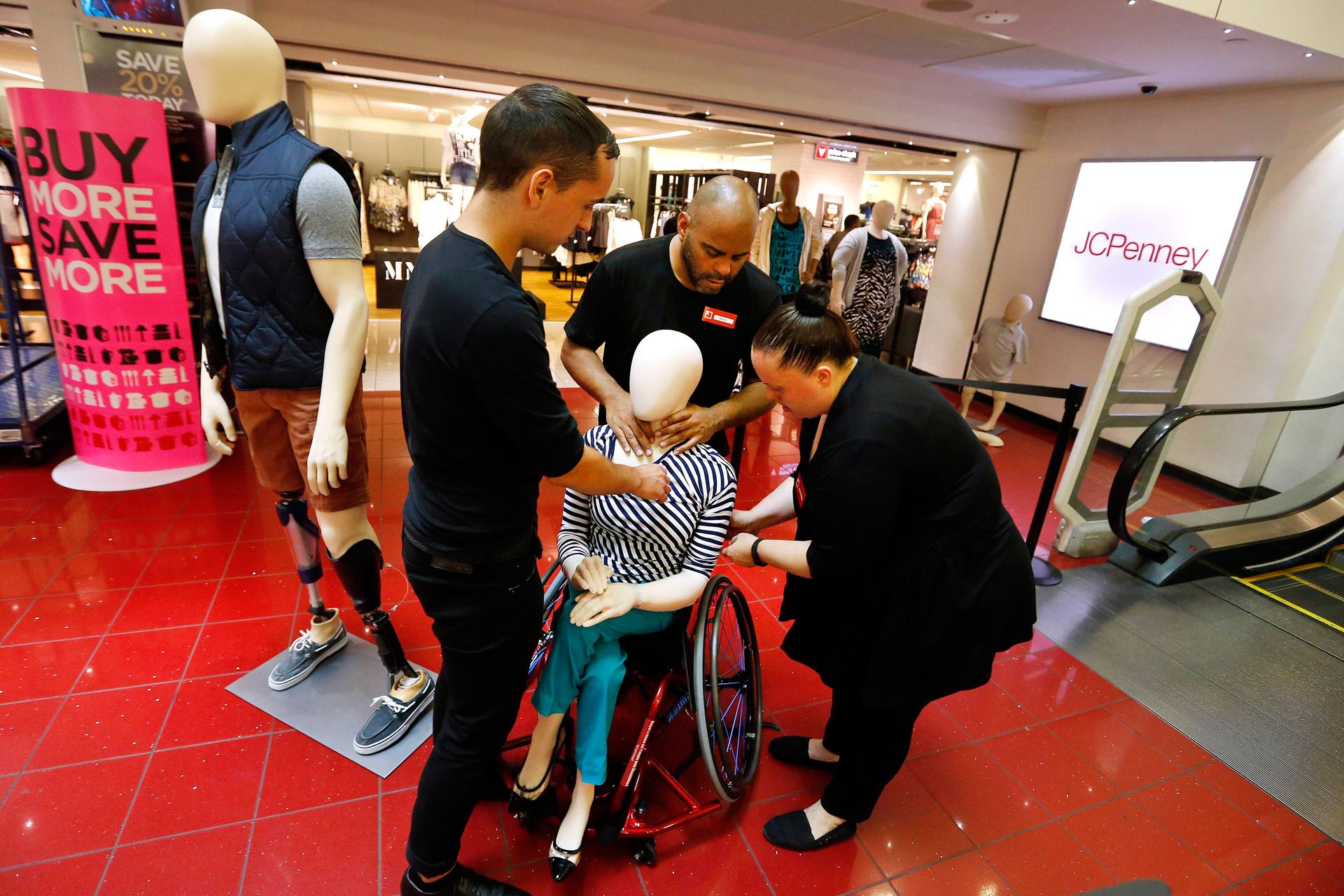 Hopefully this new move isn’t just a publicity stunt to reap the benefits of good press without making any lasting changes. Indeed, JC Penney hasn’t said whether the mannequins will remain after August. But perhaps even the gesture will help more retailers embrace realistic body types in both their mannequins and in advertising. (Too much to hope for?)

They’re certainly off to a good start with Neil Duncan, a former paratrooper in Afghanistan who lost both his legs to an improvised explosive device; Ricardo Gil, who has dwarfism; Desiree Harper, a 6’1″ college basketball player; Beth Ridgeway, a plus-sized mother; and Dawna Callahan, who uses a wheelchair due to incomplete paralysis.

Each person has their own inspiring “body story” about how they came to love themselves and their unique shapes. So far the message has really resonated with customers. One female shopper enthused, “I think it’s time that stores embrace the fact that we’re all different. We come in all different sizes, heights, weights.” Amen, sister.

‘Stop the Beauty Madness’ uses disturbing ads to make a statement about women
I may be fat, but I bet my eating disorder
Why I want my daughters to see my armpit hair