It’s sold exclusively on TwoHalvesStore.com and we immediately fell for its edgy vibe. The collection features T-shirts, necklaces, earrings, rings and more.

So what can you expect from the line? Two Halves blends Shenae’s signature boho rocker style and Josh’s punk rock roots to create a cool boy-meets-girl, ’60s-meets-’80s, East-meets-West vibe. Eager to find out more about the collection, we picked Shenae and Josh’s brains for their inspiration behind a few of our favorite pieces.

She says: I’ve always wanted a big snake ring and I’ve hunted far and wide but never found a great one that fit my finger (I have baby hands!) so I really wanted to make one for the first collection. The adjustable ring fits sizes 4-8 and just looks rad, plain and simple.

He says: A snake ring in antique finish or gold… What’s not to like? This is one of the strongest pieces in the first collection in my opinion and I can’t wait to see people rocking it around the globe.

She says: Though it’s hard to choose, I’d have to say this (in both finishes) is my favorite piece of the whole collection because it’s the first one we made. We’re always taking trips out to the desert and on one particular trip, I found an amazing old arrowhead. Without any particular use for it at the time, I brought it home knowing it would inspire me in some way or another down the line. Before we knew it, we were sourcing a manufacturer to get it made and the birth of Two Halves as a clothing and accessories brand was well on its way.

He says: I love the warrior necklace. It’s the first product we did and it kinda sparked the whole idea for the Two Halves store, so this piece will always be special to me.

She says: This was Josh’s baby out of the whole collection. While he loved the other necklace designs, he wanted to do one that was more male influenced and what’s more manly than a primitive axe?! He was very specific about the idea and walked me through sketching it. We work very closely with our manufacturer and when we went in to see the sample, they literally brought my sketch and Josh’s brainchild to life. It was incredible!

He says: The first piece that I designed so obviously I love it!!! It has already sold out on our store once so I am super stoked. 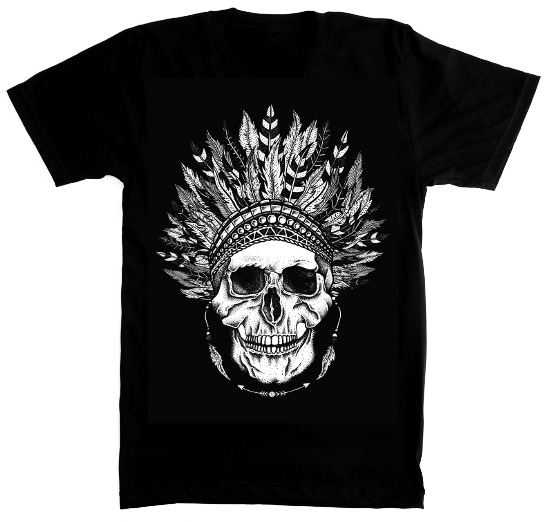 She says: I love this tee and we will soon be releasing other styles with this logo too! The skull with the headdress was inspired by a recent tattoo of Josh’s along with our infinite love of skulls, biker culture, Halloween and Native American artifacts. I initially sketched this image in pencil and our incredible graphic designer Jon Barmby and his illustrator pal Lloyd Stratton recreated it digitally. It’s timeless and is a beautiful summation of the two aesthetics from which we pull our inspiration… boho biker at its best.

He says: It’s our logo on a tee, inspired by one of my recent tattoos. I can’t wait to have more products with this [design] as I love the design and everything that it represents for me and the wifey. 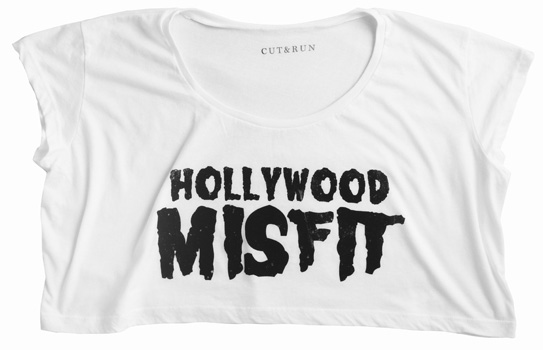 She says: I was adamant [about] doing a comfy one-size-fits-all crop top because they’re all I wear in the summer. He told me to come up with a list of slogans and the one that really stood out to him was “Hollywood Misfit.” We’ve both worked in the entertainment industry for years in different capacities and struggled to find a personal connection to the glitz and glam that go hand in hand with the careers we love. In a way, the “Hollywood” in the slogan is really just a metaphor for mainstream society and pop culture. We believe a lot of people exist within it, around it or beside it who feel like misfits in one way or another as well.

He says: If I was a chick I would rock one. In fact, if I was Rocky in Rocky 2 running up the beach with Apollo Creed I would 100 percent rock one too. These are badass.

Love it or hate it: The overalls comeback
Style lessons we learned from Chrissy Teigen
Our weekly fashion obsessions