In 2011, 26-year-old Turia Pitt set out to race in the Kimberley Ultramarathon expecting a physically challenging day. But what she didn’t expect was the brush fire that would change her life forever. Now, as an inspiration to us all, Pitt graces the cover of The Australian Women’s Weekly, sending a loud message about self-image and determination. 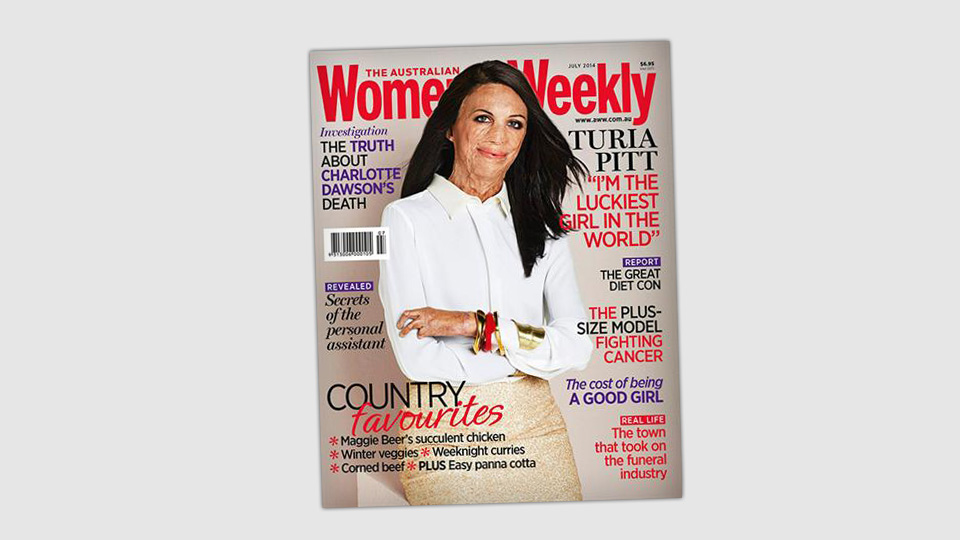 Before that day in 2011, Pitt’s life appeared to be perfect. She was an Australian model and a mining engineer, and seemed to have it all going for her. After the brush fire, however, nearly 65 percent of her body was covered in burns, and it was deemed unlikely she would survive.

But when you hear more of Pitt’s story, you’ll see she is not only a survivor, she’s also not a quitter. Rather than be defeated by circumstance, Pitt became an advocate for burn victims in developing countries by raising awareness and donations for their aid. In addition, she began sharing her story as a motivational speaker, through her book, Everything to Live For, and most recently, by posing on the cover of The Australian Women’s Weekly.

A powerful message we should all take to heart

When I saw Pitt’s image on the cover of The Australian Women’s Weekly, it was refreshing to finally see the media promoting a real person with a truly inspirational story, rather than an airbrushed fallacy of beauty and life.

Our culture has become so obsessed with perfection, and the message we’ve been sending is warped. To see what I mean, just take a stroll down the aisle at the grocery store. See who graces the covers of women’s magazines. Chances are, you’ll find Keira Knightley, Jennifer Lopez, Mila Kunis and Miranda Kerr — some of the world’s most physically beautiful women, and who despite this are still retouched before appearing on covers. Why does society idolize the perfection of these women when we should be admiring someone for who they are and what they’ve accomplished, not what they look like on the outside?

Pitt’s image really struck home for me personally because a situation this scary took place in my own family, when my sister’s 5-year-old son was burned in a grilling accident last summer. After spending five weeks in the hospital and undergoing skin-graft surgery, he’s back to school and doing well, but will continue biweekly checkups to confirm his progress.

It was a concern for my family when my nephew returned to school that the other kids might take notice of his burns and point them out or even make fun of him. However, they all accepted him with no difference, and he’s made several friends. If only the world could be so accepting of anyone who might not portray society’s ideal view of beauty.

When I asked my sister what she thought of the magazine cover, she said, “Not only is it inspiring for burn victims, but anyone who might look different. Young people will see that beauty comes from within, and in all shapes, sizes, colors and ages. What makes someone beautiful is compassion, integrity, and most importantly, how they treat others.

“I want to teach my son that people will ask him what happened,” she continued. “People might stare. And that’s a reflection of their own insensitivity, intolerance or lack of awareness.”

According to the editor-in-chief of The Australian Women’s Weekly, Helen McCabe, there was no doubt that Pitt had to be on the cover of their issue dedicated to the magazine’s annual Women of the Future awards, which gives scholarships to our future’s brightest. And we think that if any of those children turn out like Turia, the future is in pretty good shape.

Ad will make you rethink how you talk to your daughter
Memo to the media: Stop saying mothers don’t get tech
Pantene’s “Not Sorry” video misses the mark