Get the real facts behind Pompeii 3D from two female experts in the know!

t Although there’s some great gladiator eye-candy in the forms of Game of Thrones’ Kit Harrington and Lost’s Adewale Akinnuoye-Agbaje, you might not know just how much women factor in behind the scenes of this amazing adventure. 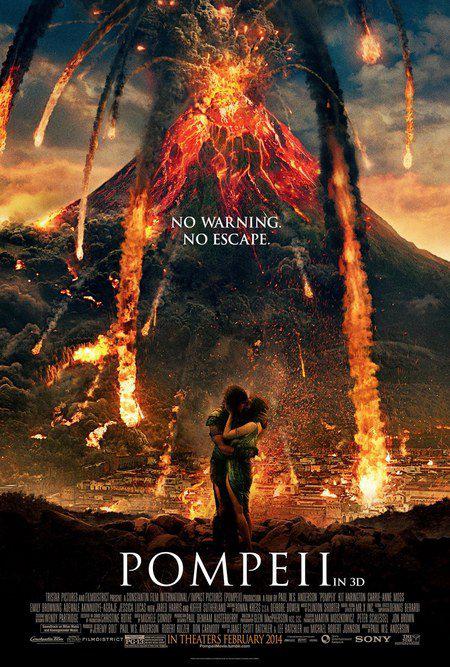 t But first, here’s the story’s skinny: Set in 79 A.D., Pompeii 3D tells the story of Milo (Harrington), a slave-turned-gladiator who is in love with Cassia (Emily Browning), the daughter of a wealthy merchant. Cassia has been unwillingly betrothed to a corrupt Roman Senator (played to evil perfection by 24’s Keifer Sutherland). And if that wasn’t trouble enough, Mount Vesuvius erupts in a torrent of blazing lava and Milo must fight his way out of the arena in order to save his sweetheart as the once-glorious Pompeii crumbles around them.

t I caught up with the cast at a press junket in Beverly Hills. The first thing Harrington did was reach for a candy. When when I asked how his life has changed since having to get in such amazing shape to play a gladiator, he joked, “Well, I’m eating a sweet, which I definitely wouldn’t have done before!” Akinnuoye-Agbaje added the fact that they had to stay in shape by spending four hours in the gym daily, then roll over into two hours of fight training, plus sustain a diet of 4,000 calories a day. (Pshaw! I could do that in my sleep, minus the gym and fight training.) 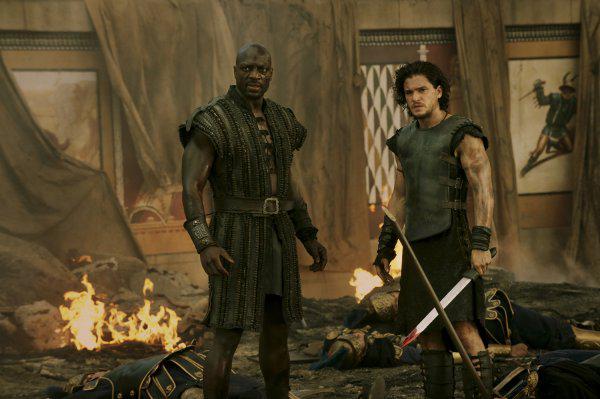 t Harrington said that director Paul W.S. Anderson wanted him to bulk up WWF style, and he tried, but the super-hunky look just didn’t work. So instead they went for “prison-fit, like De Niro in Cape Fear,” which makes sense, since he and Akinnuoye-Agbaje’s characters are indeed imprisoned when they’re not fighting for the amusement of the royals. 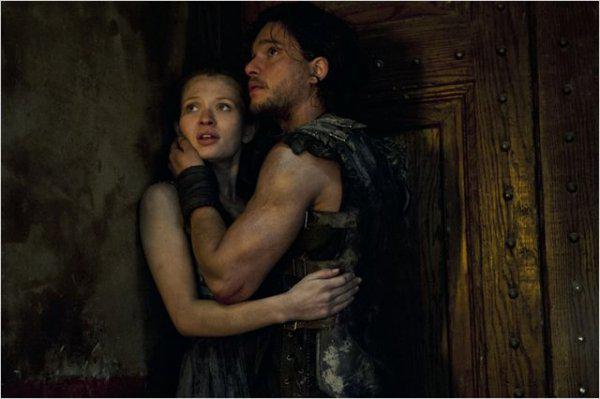 t While the director and cast talked about Hollywood movie-type things, I was fascinated by the scientific experts, Dr. Rosaly Lopes-Gautier (volcanologist) and Professor Sarah Yeomans (archaeologist). Not many members of the press asked these fine ladies questions, but I was dying to know more, so I tracked them down later on and got these exclusive tidbits just for you.

1. Vesuvius is no Rainier.

t Dr. Lopes-Gautier says: Forget worrying about Vesuvius’ re-eruption; the most potentially dangerous volcano is Mt. Rainier in Washington State. (Hm, I better cancel my travel plans to check out the Space Needle!)

t In real life, pumice, ash and rocks rained down on the city, while the film depicts awesome fireballs, raucous earthquakes and even a sizable tsunami. Those things did all take place, but they were not in such quick succession and were heightened for cinematic purposes, according to Dr. Lopes-Gautier.

3. Women in Roman times weren’t quite so sexy.

t The wonderful Wendy Partridge did the costuming, and while it’s reasonably accurate on the men, Pompeiian women would have been far more covered up, says Professor Yeomans.

4. The deaths in Pompeii 3D are romanticized.

t Anderson pointed out, “There are these two intertwined bodies and the lovers are kind of just looking at one another [preserved in the ruins of Pompeii]. And that for me was very emotional and was really the basis of the entire movie.” But in reality, death by lava is excruciating. “It’s 1,200 degrees and it will choke you… if your bodily fluids aren’t boiled away first,” said Dr. Lopes-Gautier. (Ah, a lovely thought just in time for Valentine’s Day.)

5. Titanic blows ‘em all out of the water!

t Two out of two Pompeii experts agree, if Pompeii 3D were taken out of the equation, Titanic is the best natural disaster movie ever made. (Sorry, Irwin Allen!)

t Here are my interviews with the ladies in their entirety: 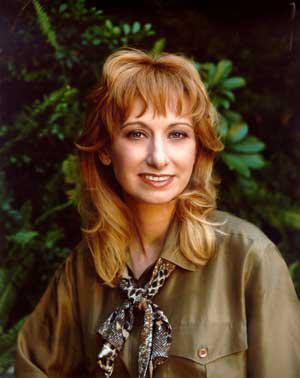 t Staci Wilson: Why do people have such an enduring fascination for Pompeii? I mean, can’t we relate better to more recent volcanic disasters like Mt. St. Helens?

t Dr. Rosaly Lopes-Gautier: I think people’s fascination with Pompeii has a lot to do with the discovery of the city and the bodies, particularly the casts that show people at the time of their deaths, and in such detail (even folds of their clothing in some cases). There have been bigger eruptions, and eruptions that killed more people.

t SW: How important is historical accuracy for you, and the scientific community in general, when it comes to big “popcorn” movies like this?

t RL: My feeling is that movies like these are dramas, not documentaries. While I’d have liked to see some of the eruption details shown in a more realistic way, I think artistic license is allowed to convey the drama.

tSW: What are some of the most active, and potentially dangerous, volcanoes in the world right now?

t RL: When we talk about dangerous, we have to take into account not only how large and devastating an eruption would be, but what is the likelihood that it would happen in the near future. So, while Yellowstone could have terribly devastating eruptions, we consider Mount Rainier to be the most hazardous volcano in the U.S. Not all Yellowstone eruptions have been cataclysmic, and a really large eruption has not happened for several hundred thousand years. Mt Rainier is more likely to erupt and, even if the eruption is not large, it has the potential to melt ice in glaciers, and create devastating mudflows that could affect areas of Tacoma and Seattle.

t SW: Taking Pompeii out of the equation, what is your favorite “disaster movie”?

t RL: That’s easy! Titanic is my favorite disaster movie of all time, although I think of it more as a drama than a disaster movie. 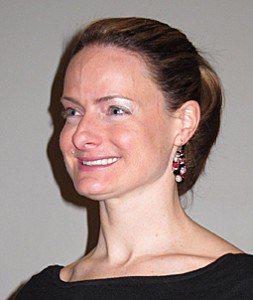 t Staci Wilson: In the movie, the city of Pompeii is made to look so beautiful and clean, and it is depicted with magnificent architecture and a coliseum… was it really like that?

t Sarah Yeomans: Pompeii did have an amphitheater (only the one in Rome goes by the name “Coliseum,” a name it acquired in the Late Antique period due to a “colossal” bronze statue that was next to it), and it’s located in the correct place in relationship to the other distinguishable landmarks in the city (such as the palestra right next to it). It would likely not have been as clean, however. Romans were a very hygienic people for their time, but would not have been considered so by modern Western standards. For example, pots were generally placed on street corners in certain quarters to collect urine (sort of like a porta-potty), which was then used by the launderers for bleaching clothes. The carts would have been pulled by animals, and so their droppings would have littered the streets, etc. In terms of architecture, Romans were superb engineers and architects, and capable of building beautiful and sophisticated buildings that exceeded even those recreated for Pompeii 3D. For the most part, the buildings we see in the movie are more or less plausible reconstructions.

t SW: In the movie, no one seems overly concerned about the volcanic warning signs. Did ancient cultures like that actually understand what was happening, or did they really think it was the will of the gods?

tSY: By the first century AD, there is no evidence to suggest that the educated and literate of Roman society genuinely believed that a forge of the god Vulcan lay beneath Vesuvius, though such an explanation was offered in Roman mythology to explain volcanic activity. Certainly plenty of people would have seen this as some sort of divine anger. but this was not pervasive in the literate classes so we’re really not sure what everyone else thought. Most learned men and women of the time understood that volcanoes were more or less natural phenomena even if they didn’t understand the science of them.

t SW: Director Paul W.S. Anderson said he set the film during the Vinalia festival so he and costume designer Wendy Partridge could have a little more freedom with the clothes. Regardless of season, how accurate were the dresses and the armor, etc.?

t SY: The men’s costumes were more accurate than the women’s. Women in ancient Rome were expected to be very modest in dress and completely covered, and that is if they even went out at all! But our modern, western view of appropriate women’s clothing (and their general visibility in society) is very different; I thought Anderson did a nice job of balancing historical representation with the sensibilities of a modern audience.

t SW: Taking Pompeii out of the equation, what is your favorite “disaster movie”?

t SY: I thought Titanic was a masterpiece of historical reconstruction. While the story was clearly fictional, I have a tremendous amount of respect for the way James Cameron meticulously researched and recreated his sets based on the actual historical material available. And besides, it was just a good tear-jerker of a story!

t Pompeii 3D is also a good tear-jerker of a story. Check it out in theaters nationwide on Feb. 21.