Cafe de Flore is a love story about people separated by time and place. 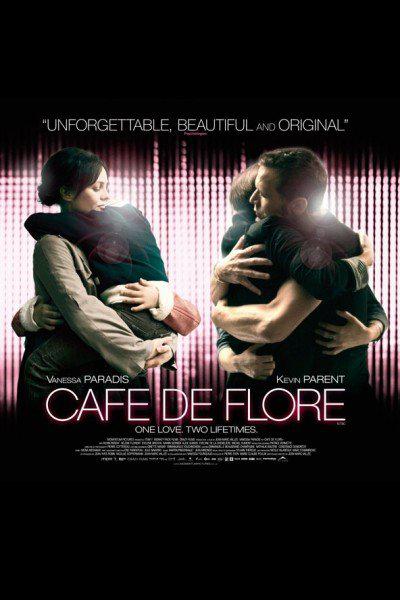 t Living in the moment, and living in the past, each life interconnected by music, are major themes in the beautiful philosophical dramatic and existential romance, Café de Flore. (This subject matter resonates within my own soul; in 2011 I made a profoundly personal short film about love and time, inspired by a song, called The Night Plays Tricks.)

t Though it is thoroughly entertaining, this is not a movie for the casual viewer.

t I first saw this French-Canadian production at a film festival and while I raved about it to anyone who’d listen, nobody could actually see it because it wasn’t widely released in the U.S. Now, finally, it’s made its way to Blu-ray, DVD and View On Demand.

t Café de Flore is the latest from Jean-Marc Vallée (C.R.A.Z.Y., The Young Victoria) and it seized my ears, heart, mind and gut from its outset. The action opens in present-day Québec, with a club mix of Pink Floyd’s 1973 masterpiece of music Speak To Me/Breathe swelling over the speakers and pouring over the dancers like notes of honey. Later on, The Cure’s pre-emo dirge Pictures of You dovetails into the classic, melancholy rock song. Sigur Rós factors in heavily; the title Café de Flore refers to a record album and a club track by Doctor Rockit, which is heard at significant moments.

t If you define the highlights and low points in life by the songs you listen to, by the lyrics that brand your brain and the notes that pluck your heartstrings, Café de Flore is bound to be a movie you’ll want to see. And hear. The score is ethereal and eclectic, adding fluidity to the elliptical storytelling style.

t The central character is Antoine (Kevin Parent) a just-turned-40 D.J., who escapes into music as a way of easing the painful poignancy of his romantic choice between his first and forever love Carole (Hélène Florent) and his new passion for Rose (Evelyne Brochu). Cut back to the 1960s, and meet Laurent (Marin Gerrier), a child afflicted by Down syndrome, who is also contending with two beloveds — his devoted mother Jacqueline (Vanessa Paradis), and the little girl he adores with all his heart, Veronique (Alice Dubois). The stories switch back through time and space, parallel in theme, tenuous though the thread may be. What connects them, superficially, is music. What connects them, deeply, is fate.

t I won’t say anything to spoil the enigmatic, metaphysical nature of the story, but it’s on par with The Fountain and Tree of Life (with a little nod to, yes, The Shining. I’m serious! Do not stop watching until the ending slide show is all over).

t Affectionate, sexy, thought-provoking, devastating, beautiful, bittersweet, life-affirming… Café de Flore is all that, and more. See it, listen to it, believe it.