The cars of the future look pretty amazing on the big screen. If only we could enjoy the technology today. Here are a few features we’ll be first in line to test drive at the dealership. 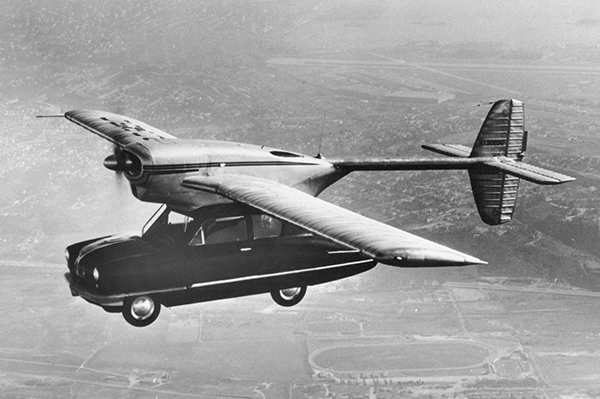 It’s 2014. Where are our flying cars? We’ve been dreaming of piloting our own pods for quite a while, yet it seems personal flying machines are nowhere on the horizon. To be fair, it’s not for a lack of trying. Henry Ford attempted to build a mini plane called the Sky Flivver that would have been marketed and sold as a “flying car”, but that project came to a halt when the test pilot was killed during a long-distance test flight.

Keep your eye on Terrafugia, the Massachusetts-based aerospace company working on the TF-X, a “four-seat hybrid with wings.”

Yes, the National Highway Traffic Safety Administration (NHTSA) recently announced it will require “talking cars” by the time Obama leaves office. But let’s be honest. All this hype about talking cars, or vehicle-to-vehicle (V2V) communication, is more about wireless data exchange than cars that actually call us by name. For now we’ll have to be satisfied with voice navigation and our beloved Siri.

Our favorite talking car will always be KITT from Knight Rider:

Societal shifts and safety concerns have created a serious demand for autonomous or driverless cars. Driver distractions are incredibly high. Auto makers have taken note, and serious efforts are underway to bring self-driving cars to market. During a March 2014 interview at the Forbes Reinventing American Summit, Bill Ford said “Self-driving cars are coming… but the technology will arrive before society figures out how to make it work.”

Check out autonomous cars in action in this clip from Minority Report:

Imagine the possibilities if our cars had ball wheels (parallel parking, anyone?). If Dyson can do it with a vacuum cleaner, why not expand the concept to actual vehicles? A group of engineering students at San Jose State University had the same idea and got the ball rolling on this futuristic feature back in 2012. Inspired by the ball wheels in sci-fi vehicles, this team of college students created a pretty impressive concept motorcycle that truly reinvented the wheel. Check out the image gallery at Spherical Drive System.

In this scene from iRobot, Will Smith uses his sphere wheels to escape from an army of killer robots:

Okay, maybe this one’s a stretch, but how awesome would it be to skip the drop-off line at the kids’ school and drop them from our hover cars in Jetson-style drop-off pods? With a push of the button, the kiddos would be safely ensconced in their pods and ejected with ease. Better yet, why not automated and programmable drop-off pods that could take the kids to soccer practice, Girl Scouts, piano… you get the idea. Car companies, are you listening?

Judy and Elroy Jetson get dropped off at school — literally:

See how Google is making the driverless car a reality in this video.