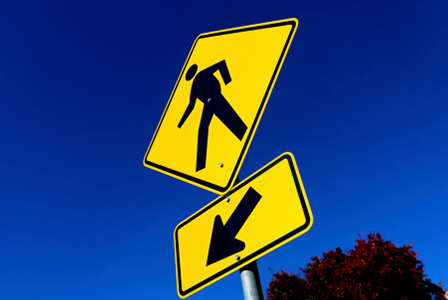 While individual states have their own particular brands of bizarre traffic laws — in Massachusetts, for example, you can’t operate a car with a gorilla in the backseat — there are a number of traffic laws that are oft-forgotten and oft-broken in all 50 states.

Failing to use signal

Come on, people, use your turn signal. It can prevent collisions, it’s easy to do and you’re actually breaking the law if you don’t use a signal when switching lanes or turning.

We all know how annoying it is to be tailgated by an aggressive driver, but the behavior is actually unlawful. Most states have laws that stipulate you must be at least three seconds behind the car in front of you, or else you could get a ticket.

While driver’s license issues aren’t moving violations, they’re some of the easiest laws for drivers to forget about. When you switch residences, you need to let your state DMV know about your address change within 30 days, or else you’re in violation of the law.

All those lines on the road aren’t just showy artwork. They’re supposed to alert drivers to rules for behavior. Many drivers, unfortunately, disregard the lines on the road and do whatever the heck they want. As a driver, you’re never allowed to cross a solid white line. Wait until the lines turn into dashed lines rather than solid before you switch lanes.

Passing in a no-passing zone

We know that you have places to go and people to see, but you just can’t pass slower drivers in a no-passing zone. Use the left-hand lane for passing if there’s more than one lane. Otherwise, wait until the yellow lines on the road change from solid into dashed before you attempt to pass.

Wait, but I thought cutting through a parking lot was just a savvy way to avoid traffic? Nope. It’s illegal.

Not stopping for a school bus

This is a big one that can set you back hundreds of dollars if you get a ticket. If you see a school bus stopping to load and unload, you simply must stop and wait for the bus to start rolling again. Think of the children, people.

The shoulder is there to provide space for drivers to pull over in an emergency, as well as access to accidents for emergency vehicles. It is definitely not there as your personal HOV lane.

Texting or calling while driving

Failing to yield to pedestrians

Unlike in many European countries where drivers will speed up to frighten a pedestrian crossing the road (not that it’s ever happened to me, ahem), American laws typically give the right of way to pedestrians. You have to yield to a pedestrian, even if he or she is crossing dangerously or wearing a terrible outfit. Bummer.

SUV or Smart Car? Choosing the car that fits your life
Talk to your mechanic man-to-man
10 Things to consider when buying a new car