Teaching your cat to utilize the toilet is no longer a thing of your dreams. Cost-effective and odor eliminating, these products are the answer to many a cat lover’s prayers.

Related story This Super-Plush Pet Bed With Over 52,000 Five-Star Reviews Is the Ultimate Snuggle Spot for Dogs & Cats 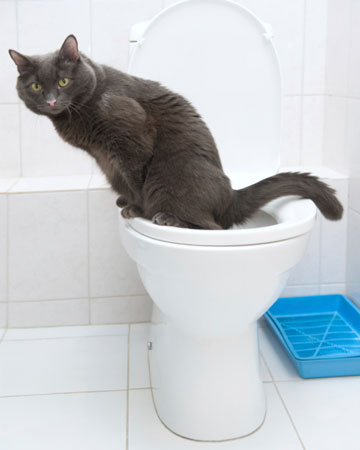 Believe it or not, your cat doesn’t care for the smell of its litter box either. Covering its waste as a means to eliminate the odor, the cat likes its environment to be clean. Being a resilient species, cats may be more welcoming to other methods of waste disposal than you think. 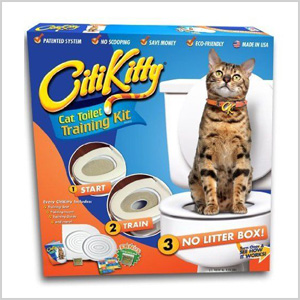 Similar to how you would toilet train a toddler, the CitiKitty toilet-training kit uses a specialized removable seat that goes directly on the toilet. Said to create the same look and feel as a litter box, the cat learns to go from the litter box to the toilet in five easy steps. Estimating full use of the potty in about four to six weeks, the cat thinks it’s going in a litter box until it eventually becomes used to the toilet seat as its bathroom location. Clean and cost-effective, the concept behind the kit is to eliminate the need for kitty litter. With rave reviews, this designer was featured on an episode of Shark Tank. (Wag.com, $28) 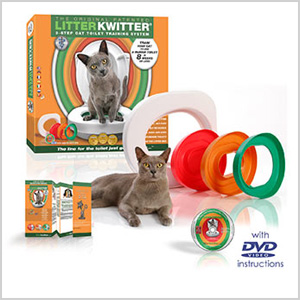 Similar to the CitiKitty product, the Litter Kwitter toilet-training kit also comes with a removable toilet seat, three different-sized litter trays and an instructional video for owners. Promising to toilet train your cat in an estimated eight weeks, the Litter Kwitter hopes to avoid the need for smelly and germ-infested litter boxes. Unlike the CitiKitty, the Litter Kwitter does provide a litter environment but slowly takes it away as the cat adapts to the toilet seat itself. Developed by animal behaviorists and breeders, this is a safe and easy method for your kitty to learn to use human facilities. (Petco, $50) 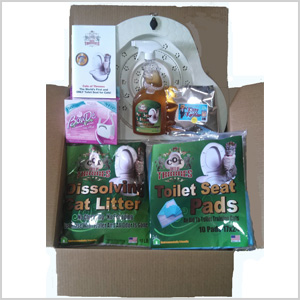 Another type of toilet seat for your cat, the Cat of Thrones is only one seat, rather than a kit that includes various-sized seats. Said to be environmentally- and user-friendly, this toilet seat eliminates the need for kitty litter by teaching your cat to become accustomed to urinating over what is essentially a hole. Using an automated system, the Cat of Thrones starts out without any opening and only small drainage holes before adjusting little by little until the cat is fully used to its new litter area. Available by itself or as a kit that includes dissolving cat litter, odor and stain eliminator, a black light and sanitary wipes, the Cat of Thrones toilet seat is made so that it does not interfere with human bathroom needs. ($75-$108) 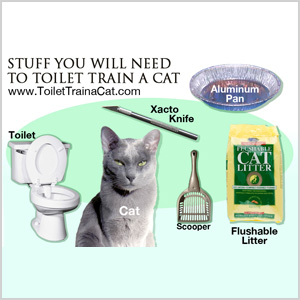 Yes, you can buy the fancy toilet seats and kits to toilet train your kitty, but you can also make your own. Using an aluminum pan, an X-Acto knife and flushable litter, you can make your very own seat meant just for the kitty. A bit dirtier than the products available, it is certainly cost-effective. Saying that it will only take two weeks to train your cat with the DIY method, you can find the full directions on how to teach your cat the ways of the human on the Toilet Train A Cat website.

6 Tips to keep your cat healthy
Indoor cat or outdoor cat? What to know before you decide
5 Common cat health problems that you can prevent

39 mins ago
by Taylor Lane

How to Nail Your Holiday Shopping List By Keeping It Simple

4 hrs ago
by Andrea Stanley