No More Woof, a new gadget by The Nordic Society for Invention and Discovery, claims to read your dog’s mind and translate woofs to words. Is this product legit and worth the $65-$1,200 price point? Let’s find out. 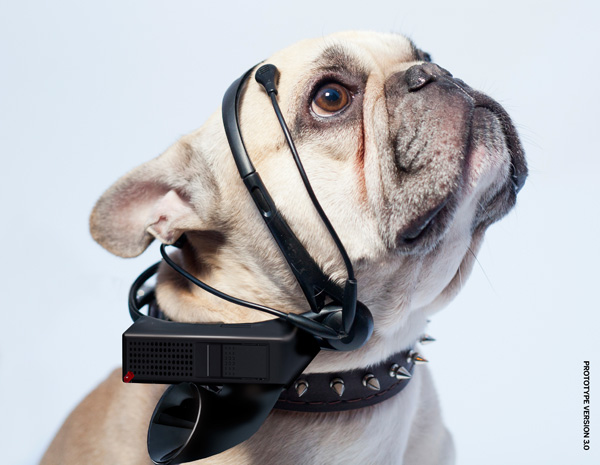 “The antidote to digital Darwinism” is The Nordic Society for Invention and Discovery’s (NSID’s) tagline. Founded in 2013, the forces behind NSID believe that new disruptive ideas are killing old business quickly — and that this is a good thing. The NSID works with eight Nordic companies and is made up of scientists, engineers and self-proclaimed “crazy people” who are willing to think out of the box — way out of the box. Some of its products include Nebula 12 (a weather forecasting lamp), Cocoon 1 (a transparent piece of bubble furniture) and No More Woof — an in-progress device claiming to translate animal thoughts into human language.

No More Woof is a prototype attempting to answer the question: What is your dog really thinking? At the moment, you can pre-order three versions of the product:

How does it work?

What everyone wants to know, of course, is how does No More Woof work? The technology used in No More Woof is the result of combining the latest technologies in three different tech areas: EEG sensoring, microcomputing and special BCI software. During the last decade, huge discoveries have been made to map out the human brain’s functions. But no one has ever made a serious attempt to apply this groundbreaking technology to man’s best friend. Until now, that is.

The NSID is basing the No More Woof concept on the fact that every mammal creates and transports “thoughts” the same way — as a swarm of electrical signals through a complex neurosystem. It has long been possible to record this activity through electroencephalogram (EEG) readings. But every species uses its unique structure. The creators of No More Woof say, “You could say that all creatures speak the same language, only with varying dialects. And as animal brains are less complex than human brains, their signal patterns are more distinct for feelings of anger, curiosity or tiredness. [And this simplicity] actually makes [their signals] easier to distinguish.”

What people are saying

The NSID is the first to say — and repeat — that this technology is in its beginning stages. But is it legit? Cathy Alinovi, DVM, is the owner and veterinarian of Healthy PAWsibilities — formerly Hoofstock Veterinary Services — in rural Pine Village, Indiana. She treats 80 percent of what walks in the door with adequate nutrition, not expensive prescriptions. We asked Dr. Alinovi what she thinks about the viability of No More Woof. She says, “I think the technology is interesting, and it is an application of normal brain-wave technology. However, I don’t know that it’s so easy to translate brain waves into thoughts, feelings and meanings.”

Dr. Alinovi appreciates the concept, saying, “Certainly everyone wants to know what their pets think of them or of their life. Many of us pretend we are talking for our dogs. But how do the researchers know that the answer the machine gives us is really the truth? The exact same testing in humans is easy to check. The machine can take a reading and then the researchers can ask the human, ‘What were you thinking?’ Obviously a human can communicate this verbally. How will a dog do that?”

She asks the same question many of us have: Is it as simple as matching the exact same brain-wave pattern to what a human pattern would be and assuming that is the thought? Dr. Alinovi says, “While humans and dogs have the same areas of the brain, I don’t think we can assume that thoughts are formed in the same way. So much of our thinking and our brain processing is due to prior experience and memories. With time, pet owners will learn if this technology has any validity. Many pet owners think they can tell you what their dog or cat is thinking. And it would be totally exciting if something came along that would provide that information to the pet owner. In these early stages, this technology is probably more of a fun-to-have type thing than an accurate tool of communication.”

Will you be investing in No More Woof? Do your research first by visiting the site, following the progress on Facebook and Twitter and watching the video below.