Thanks to Ellen DeGeneres and the Oscars, we now know exactly what Lupita Nyong’o carries inside her clutch: lip balm, duh! 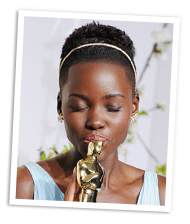 The lip balm
seen around
the world

Thanks to Ellen DeGeneres and the Oscars, we now know exactly what Lupita Nyong’o carries inside her clutch: lip balm, duh!

12 Years A Slave star Lupita Nyong’o took home the Oscar for Best Supporting Actress last night, but that wasn’t the only thing the social media world was abuzz about — her lip balm was apparently all the rage. In fact, it was even a trending topic on Twitter as #lupitaslipbalm.

Who do we have to thank for that? None other than Ellen DeGeneres, of course. The hilarious host decided to spice up the Academy Awards with an impromptu pizza delivery, for which she went around collecting money to pay for from the audience. When the hat finally got to breakout star Lupita though, the only thing she had to offer up was her CLARINS HydraQuench Moisture Replenishing Lip Balm, which Ellen thought was pretty awesome too.

“Lupita’s lip balm! That’s worth something,” she joked upon receiving the tiny blue tube. It’s no surprise Lupita had some tucked away in her clutch, as it’s the one makeup must-have she always has on hand.

“When your lips are dry, you can’t think of anything else,” she revealed in a recent video interview with Essence magazine. “I don’t wear makeup when I’m not working on the red carpet. Except for a night out here and there, but I try to give my skin a break.”

If you want to snag Lupita’s famous lip balm for yourself, you had better act fast. The $24 beauty essential has almost sold out overnight. Luckily, we found some still in stock on the CLARINS website.