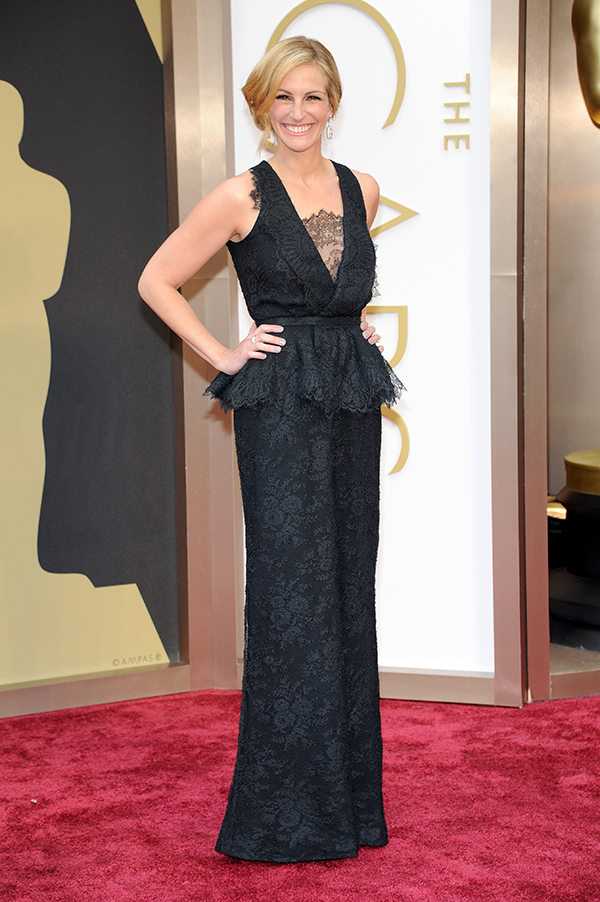 First of all, major props go to Julia Roberts for having the courage to attend the Academy Awards tonight. With her half-sister’s recent tragic suicide and her mom’s ongoing battle with lung cancer, we’re sure fashion was the very last thing on her mind tonight, and rightfully so.

In fact, the decision to attend was apparently a last-minute one, and it was her mom, of all people, who encouraged her to go. Given all these unfortunate factors, we couldn’t really care less that it wasn’t Roberts’ very best night style-wise. She was still glowing; still stunning. And, she managed to crack some smiles as she walked her first Oscars red carpet in several years.

The 46-year-old Best Supporting Actress nominee chose an appropriately glum, black, lacy peplum gown by Givenchy, paired with pretty Bulgari jewels, nude makeup and an elegant updo for the occasion. While black has been her go-to Oscars color for quite some time now and she can absolutely pull off the hue, we wouldn’t mind seeing her step outside her comfort zone a bit next year and don a brighter dress.