We love Jennifer Lawrence, we really do. And we also can’t get enough of Christian Dior. But man, it sure would be nice to see her switch things up and go with a different designer for once. Next time, please, JLaw? 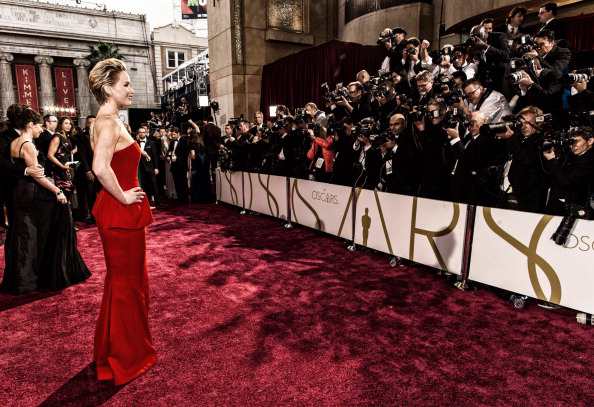 We get it. As the face of Dior, American Hustle star Jennifer Lawrence is kind of obligated, if not extremely encouraged, to rep the brand at all times, especially considering that the Oscars is the biggest award show of the year. Her bright red peplum gown at the Academy Awards last night was a huge hit and probably one of her best all season.

Despite the fact that she always looks dashing in Dior, her dresses are starting to get a little bit too predictable, even for us. We wish she would (or could) branch out and wear someone different on the red carpet. Ah, a girl can dream, right?

Until then, let’s take a look back at a few of her most noteworthy Dior gowns, all of which are actually strapless (another trend JLaw seems to love). 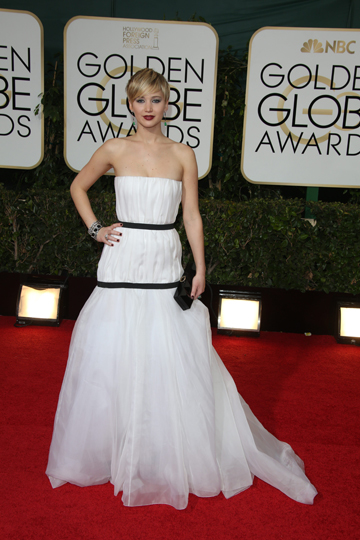 For the 2014 Golden Globe Awards, JLaw graced us with her presence in a simple but chic strapless white dress that featured two black belt-like ties wrapped around it. The gown may not have been her best, but it definitely garnered a lot of social media attention, with people dressing up like JLaw using duvets and bedsheets! 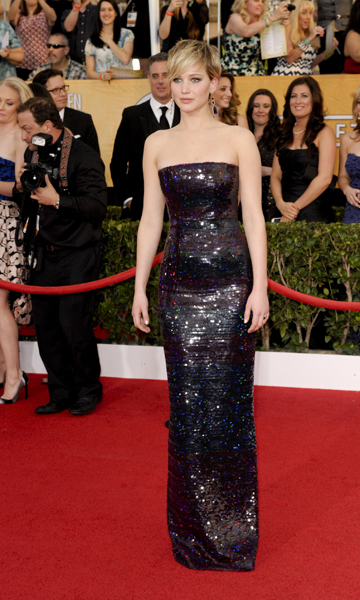 Lawrence got super-glitzy for the SAG Awards this year, choosing a sexy but playful dark Dior gown that was covered in multicolored sequins and hugged her curves in all the right places. “I know I have armpit fat, it’s OK… it’s armpit vaginas,” she joked when E!’s Giuliana Rancic asked the actress to describe her gown. Oh JLaw, we just adore you. 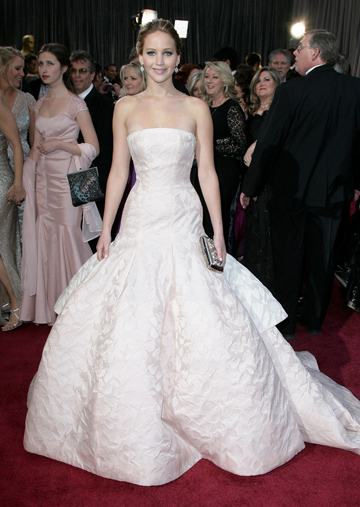 At last year’s Oscars Lawrence made a big splash in a breathtaking pale pink Dior Couture gown that had her at the top of everyone’s best-dressed list. Who really cares if she tripped up the stairs to accept her Best Supporting Actress award when she looked that dang good? 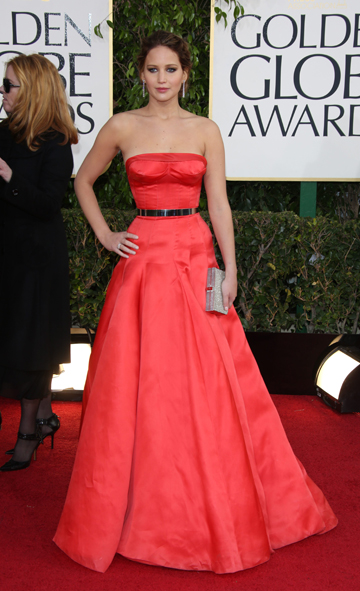 Jennifer Lawrence was definitely seeing red at the 2013 Golden Globe Awards. The breakout star wowed in another bold red strapless Dior dress with a black belt at the waist. Back then she didn’t really get what haute couture meant, though. Of the dress, she told reporters, “It’s Dior haute couture. I don’t know what ‘haute’ means, but I have to say it.” Ha ha. 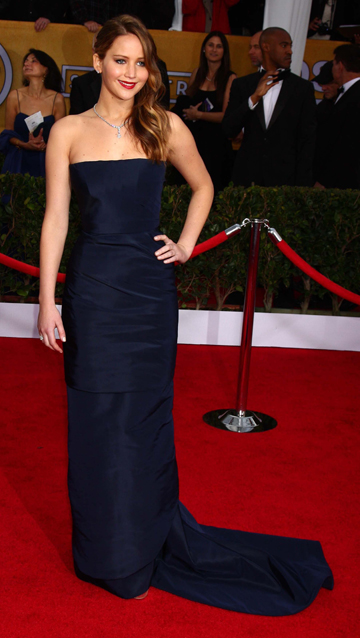 No doubt the strapless navy number JLaw wore to the 2013 SAG Awards was a true beauty. But the real story of the night was whether or not her Christian Dior creation had ripped. Good news, it didn’t!