Do you find yourself obsessively making sure the lighting’s “just right” before getting frisky with your beau? (I used to unplug the lamp earlier in the day and then go, “Huh, weird,” when it wouldn’t turn on. I wish I was joking.) Or perhaps faking a headache/sickness/injury because you didn’t have time to shave? 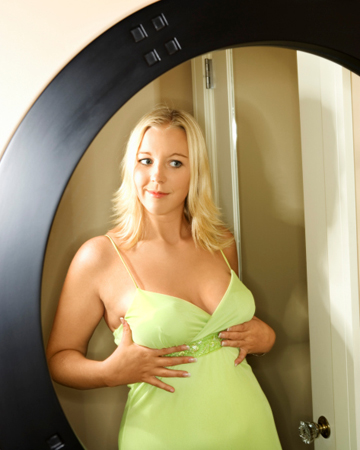 Sure, we could blame our obsession with nakedness (in front of a boy!) on Victoria’s Secret models, but we don’t have to drink the Kool-Aid.

You don’t care about your sig-o’s supposed “imperfections.” If anything, you find they add to his charm and are what make him unique (right?!). The same goes for how he feels about your quirks — so why are you ruining your most intimate moments by not being fully intimate?

Below, a roundup of the ridiculously human things we obsess over that men don’t give a flying you-know-what about (they’re just happy to be getting some!):

It doesn’t matter whether you’re concerned about them sagging or not being big enough (or in my case not being able to find them) — guys are just happy to see boobs in general.

All he cares about is that you’re comfortable in your skin. No matter how many stretch marks or how much cellulite you have, comfort trumps all of it.

“Women are too stressed to have a good time because they’re so focused on setting a particular scene,” says Masini. “Whether it’s a romantic bedroom or hot tub scenario, or even their appearance for a date, they’re wasting energy. Guys appreciate the broad strokes.” Every wrinkle you obsess over, every candle you insist on rearranging, you’re removing yourself from the moment.

He doesn’t care about the stubble whatsoever. I’d imagine the only way this would become a turn-off is if you were to let your legs go for quite a while, then look at his and say, “Hey look, we match!” In that moment, he’d probably volunteer to shave them for you. (Actually, that’s not a bad idea…)

How you prefer to groom down yonder

It doesn’t matter how he prefers women groom — and he likely doesn’t have a preference. All he cares about is that you’re confident about your personal preferences (and you know, that it’s clean).

Concern about your inner animal

“Spectatoring” is when you’re focused on how you might appear during sex from a third person perspective instead of first person. “It’s kind of like watching yourself as though you were in a movie rather than in your own skin having the experience firsthand,” says Carol Anne Austin, sex educator and psychotherapist at Kimberly Moffit and Associates. This habit increases self-critical thoughts regarding body image and performance anxieties, which puts a Great Wall of China-sized barrier between you and your sexual pleasure.

If you’re worried about how you look or sound during sex, just don’t. “Women who are more concerned with controlling their behavior in bed are doing themselves a disservice,” says Masini. He doesn’t want you to hold back — he wants the exact opposite. Make him proud — even if that means looking like you need an exorcism. Grrr, baby!

OK, so laundry day panties aren’t the best looking garments in the world, but the only person who’ll have a problem with them is you. In all seriousness, they’re going to be crumpled up on the floor at warp speed anyway.

I repeat: Men don’t care about any of these things. So why should we?

More ways to strut your stuff