Oops… even celebrities get it wrong sometimes! We’re telling you why Jessie J and Julianne Moore’s fashions fell short in our weekly feature. Learn from the stars’ sartorial slip ups! 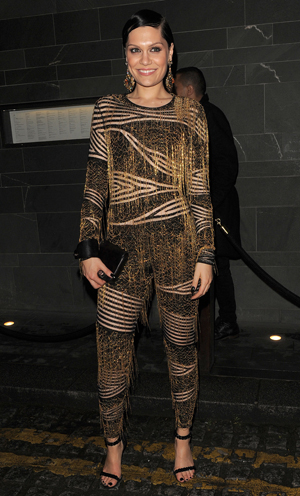 Chewbacca, is that you? It seems Jessie J was inspired by the hairy Star Wars character in this Julien Macdonald jumpsuit. The British singer wore this hideous look to the Universal Music after party following the 2014 Brit Awards in London, and we have just one question: Why?

A fur or fringe accent is one thing, but when your entire outfit looks like it needs to be brushed, something is wrong. The wispy threads hanging off the whole thing remind us of a stray dog who should be taken straight to the groomer. Then there’s the zebra-esque pattern underneath that hair, which is also rather intense to sport head to toe (or is it tail?).

The final verdict? We actually liked the look Jessie wore for the actual Brit Awards earlier, which was another jumpsuit, but not nearly as hideous. There is just nothing redeeming about this ensemble. Just because you’re wearing animal print doesn’t mean you have to actually dress like one. 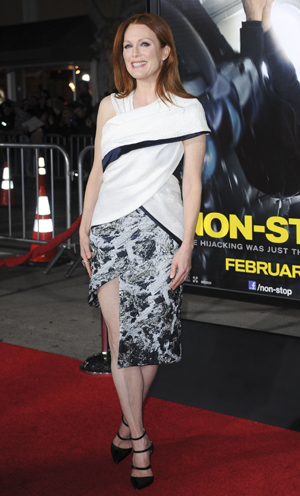 Did Julianne Moore come straight from fighting tributes at The Hunger Games arena in this ripped up dress? The Mockingjay actress hit the Los Angeles premiere of Non-Stop wearing this jagged dress which is by Prabal Gurung.

The top of her frock looks like something you’d wear to a toga party in college to do keg stands in. The navy-accented draping in the midsection does nothing for her figure and adds bulk. Perhaps Julianne couldn’t decide whether to go for a short or long hemline, so she did both? One side of the skirt is so short, it barely passes the fingertip test, yet the other side is below the knee.

The final verdict? The patterned, zigzagging and draped dress would be tough for anyone to pull off, so Julianne shouldn’t feel bad. But next time she’s conflicted about showing skin, keep your hemline one length and show some cleavage or decolletage. This is a wardrobe malfunction waiting to happen with one gust of wind.