It’s time to embrace our imperfections and be real about what we look like. 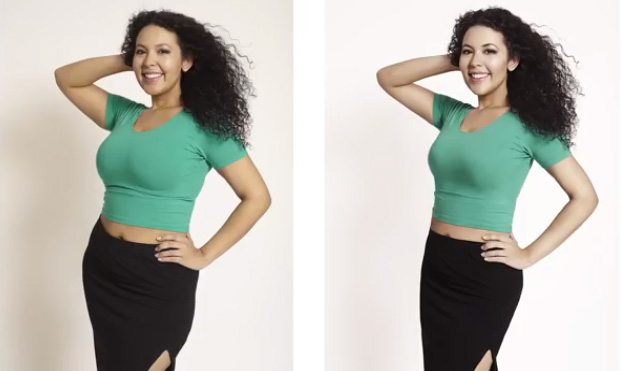 When it comes to the role of Photoshop in the media, it’s important to have a conversation about what we see versus what’s reality. This conversation isn’t new, but in the last year it has been taken up by more and more people, fueled by an onslaught of clearly altered magazine cover photos (Lady Gaga hated hers and Lena Dunham defended Vogue in response to backlash about hers) and videos that show how different final photos that we see in the media can look compared to the real women that they are documenting.

The moral is this: Even supermodels don’t look perfect. In fact, our beauty lies in our imperfections.

That’s exactly what Buzzfeed found when they took four real women (by real, we mean not models or actresses or anyone that makes their image their profession) and put them through a professional photo shoot, then tweaked the photos exactly as they would for a mass media setting.

The results will inspire you

While we might assume that the women were happy to see a different version of themselves — a version that’s much sought after in our society thanks to mass media. And yet, the response wasn’t all positive. “Once you take away your imperfections, there’s not much left of who you really are,” responded one of the women after she saw her photo.

So while as women we’re inundated with images of unattainable perfection almost everywhere we turn, are we smart enough to know that that’s exactly what they are, unattainable? Are we satisfied with our imperfections to the extent that we don’t want them photoshopped away?

Professional runner Lauren Fleshman touched upon this issue when she posted an article called Keeping it Real, giving us a look at some runway photos taken of her, and a few other images taken that week that were, as she put it, “in much less flattering positions.” In fact, one of them was her squeezing her inner thigh — not really a loved area for any of us.

The response was incredible, the blog went viral and women from every corner were thanking her for being an inspiration for keeping it real. As Fleshman wrote in a follow up article in Runner’s World, “What the hell is wrong with us? We have this one body we are born with, live inside of and move through the world in. Why aren’t we walking around naked, like “Booyah! Look what this body can do, bitches!” Blame the Puritans, blame Glamour, blame Photoshop if you want, but at some point we have to stand up and own the body we’re shakin’. We have to make a statement that “THIS IS REAL” and move forward.”

She’s right. And maybe we all just need a little more inspiration to #keepingitreal, to not hide but to stand up for ourselves and our bodies. To embrace who we are. To know that for every good photo taken of us there are tens, if not hundreds, if not thousands of bad ones. But we are real women, and we shouldn’t be constricted to what a photo can express.

Maybe that’s what those four women being photographed and photoshopped were feeling. We know when things are too good to be true. It makes us uncomfortable. And to wipe away all the things that make us an individual in the name of a societal understanding of beauty can easily strip away our personality.

Beauty is in the imperfections, and to be even more beautiful, we have to embrace them.

Being plus-sized in a skinny world
Orthorexia: Is your healthy eating unhealthy?
Survey results: How social media affects your body image

55 mins ago
by Taylor Jeffries