According to a national survey of 150 senior executives and CEOs from the nation’s top 500 manufacturing and service firms, most American employers would urge employees to seriously upgrade heir workplace wardrobe choices. Jeans, tight or revealing clothing, flip-flops and sweats were among the major offenders, and overall, the bosses surveyed said they’d like their employees to “dress more formally.” 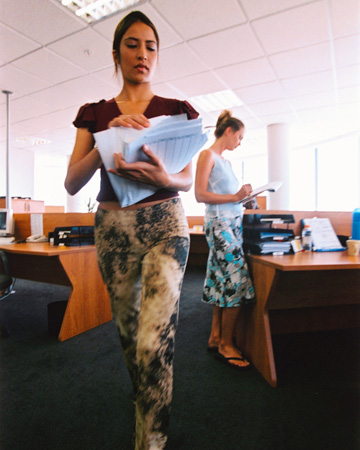 So, what does your boss really think about your appearance at work?

When Kelly Lee* started her new position as a marketing manager for an accessories company, she inherited a customer service representative who had been with the company for nearly two years.

Since the parent company is based overseas, Lee and the customer service rep are the only staff based in the U.S. And while she was willing to give the young woman the benefit of the doubt at first, after working side by side with her for several weeks, she couldn’t help but notice her unkempt appearance.

“When I first saw my employee, I thought she was really taking advantage of the fact that she was working [in the office] alone. Her physical appearance was not that of an employee that you would see in a traditional setting,” says Lee.

Because Lee’s office doesn’t receive visitors or communicate with customers in person, she sees her employee’s “disregard for looking professional or at least presentable” as disrespectful.

“I see full tears in her shirts, stains and dirt on her pants, and I’ve become familiar with her wardrobe because she only wears black,” says Lee. “She doesn’t see me as an authority figure and doesn’t feel she has to present herself in a professional manner.”

Lee also views the employee’s appearance as a direct reflection of her job performance. “[She’s] very nonchalant and sloppy with a lack of urgency. I would not have hired her for the role.” As a result, Lee plans to let her go.

Similarly, James Williams* has managed a small team of content producers at an entertainment company for several years. Over time, he’s noticed that one of his staffers always looks tired and rumpled.

“I think less of my employees when they are disheveled because it shows a lack of attention to detail,” Williams explains.

“Even in a casual environment, it’s not acceptable to wear ripped jeans, wrinkled clothing and overly worn shoes and sneakers.”

He adds, “When an employee dresses more professionally, it tells me they respect and care more about the job.”

In a major survey, 95 percent of employers interviewed said a job seeker’s personal appearance affected the employer’s opinion of that applicant’s suitability for the job. That same survey reported that 91 percent of employers interviewed said they believed dress and grooming reflected the applicant’s attitude towards the company. And 61 percent said dress and grooming had an effect on subsequent promotions as well.

Erica Ravich, an account executive and full-cycle recruiter for Clarity Staffing, a boutique recruitment firm in New York City, agrees that how you dress often determines whether you’re hired in the first place.

“As a recruiter, I always consider the most-qualified candidates for a role, but that also includes a candidate’s polish,” says Ravich, who is also a volunteer career counselor at NYU Wasserman Center for Career Development.

“At the end of the day, an employer wants to feel assured that you would represent their brand in the best way possible. If a job-seeking candidate comes in for an interview all disheveled, it reflects poorly on their judgment, or it may just make apparent that we are not aligned on what’s appropriate versus what’s not, which isn’t a good starting point.”

To make sure you put your best foot and wardrobe picks forward at work, Ravich offers the following tips:

Always dress to impress on a job interview

Your first impression is your only impression, so it’s important to nail it. Dress in a polished and professional manner, which is different at every company. Some companies are more corporate than others, but regardless, you should always lean on the conservative side and never wear anything too tight, revealing, short or dirty. You should be more dressed up than the office uniform, your clothes should be clean without wrinkles, hair should be groomed and makeup and nails should be subtle.

Even if it’s raining, be sure to change out of your rain boots in a nearby coffee shop, not the employer’s bathroom — you never know who is in there.

Know when to save it for the weekend

If you put something on in the morning and you question whether the outfit is on the cusp of being inappropriate, it probably is. So save that outfit for the weekend. Remember, you’ve worked hard to get the job; don’t let your attire be the thing that gets the attention. You want to be known for your great work and ability to fit in well with the team.

Dress conservatively, even if the office is casual

As a new hire you want to impress your team from the beginning. If you are in a casual office, step it up a notch and wear more conservative clothes until you feel comfortable that you are making a good impression. You want to gain your colleagues’ respect and demonstrate that you are a good fit for the team. Don’t let your outfit/hair/makeup choice get in the way of that. Eventually you will be able to express more of your personality.