Your cat looks out the window, longing for the great outdoors. Before you open that door, however, know the pros and cons of letting your pet explore beyond your home. 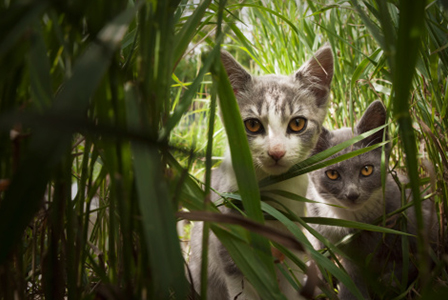 With more than 95 million cats owned in the U.S., one thing is clear — cats have won a place in the hearts and homes of U.S. residents. While some choose to keep their furry friends indoors, others choose to let their cats explore beyond their home.

While there is no single answer to the indoor/outdoor cat controversy, cat owners should take note of these items to consider before opening that door to the outside world.

They can be, but experts say there are more factors that pose a risk to outdoor cats. Overall, outdoor cats are generally healthier from the standpoint that they are slimmer, in better physical condition and have a much fresher diet closer to what they are designed to live on, says Dr. Patti Maslanka, owner of HomeCare Veterinary Services.

“Outdoor cats need to be vaccinated against FeLV as kittens, boostered at 1 year of age and then every 3 years thereafter — at least until 8 years of age,” he says.

Some cats may benefit emotionally by being outdoors, however, Salkin says. “Cats used to being outdoors may become anxious and frustrated when restricted to the indoors,” he says. “Behavioral problems, such as aggression to owners and other pets and inappropriate elimination can be the result.”

Is it safer to keep cats indoors?

Cars, wildlife and other cats competing for territory can all pose a risk to your outdoor cat. In fact, according to the ASPCA, it’s estimated that a cat allowed outdoors in the U.S. lives an average of one quarter as long as a cat living exclusively indoors.

Whether you keep your cats indoors or outdoors, it’s beneficial to their health to spay or neuter them, says Dr. Jules Benson, vice president of Veterinary Services at Petplan.

“Even indoor-only cats have been known to sneak outside and have encounters with other cats — and it wouldn’t be the first time I’ve seen a female come home with a litter on the way,” he says.

Are there other risks involved?

Bird watchers: take note. While there are risks to outdoor cats, there are also risks to other wildlife around your home. If you feed outdoor cats, know that you are supporting them to be in better condition and at an advantage over the wildlife on which they prey, Maslanka says.

“If you keep a cat outside, there have to be some measures taken to protect birds,” she says. “If the cat will wear a breakaway collar with a bell, that would be ideal, or perhaps only letting it out for a short period in the early evening after the birds have retired will help.”

At the very least, don’t keep a cat outside and also have a bird feeder to attract the prey for them. If so, you’re just asking for a massacre. Here are some tips from the National Audubon Society on how to reduce the threat to birds from cats.

Do you think cats should be kept indoors or free to roam the neighborhood? Sound off in the comments below.

The pros and cons of letting your cat roam
Is it safe to let your cat roam free?
12 Ways to protect outside pets in winter