Watch as this fish swims in a tank and steers a remote-controlled cart. 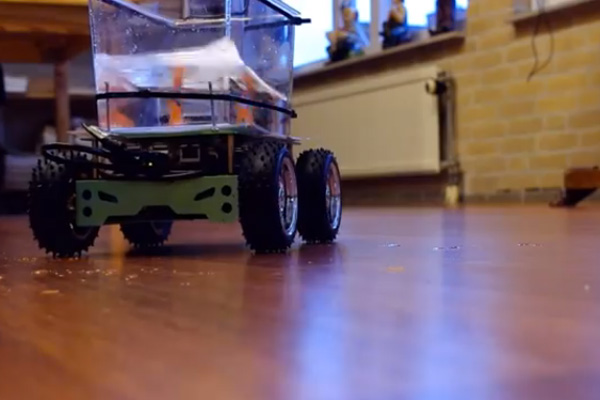 Leave it to the folks at Studio diip to keep us entertained — and mystified.

They’ve rigged a fish tank on a remote-controlled cart. The fish in the tank may not know its steering, but when it swims, it actually moves the cart. The cart is an Arduino-powered robot vehicle with a BeagleBoard, along with a webcam. The fish’s position sends messages to the microcontroller to steer the vehicle, allowing the fish to swim and drive on a solid surface.

Thomas de Wolf, one of the creators of the Fish on Wheels contraption, said they created it to showcase the possibilities of computer-vision technology.

“We then came to the idea that with computer vision, even animals would be able to control devices. The best way to show this was to enable fish to drive their own aquarium wherever they want to go,” said de Wolf, a co-founder of the company based in the Netherlands that specializes in image-recognition technology.

They constructed the prototype version and tested it until the fish was able to control the cart.

“We are still not sure if the fish really has any idea of what it is doing for now,” de Wolf said, noting that after the fish “drives,” it is then put back into a normal aquarium with other fish and plants to avoid over-stressing it.

Studio diip hasn’t ruled out the possibility of turning the project into a kick-start initiative in the future. They need to fine-tune the prototype first, but the project has certainly been popular in the media — something that could raise its notoriety if it seeks crowdfunding.

“I think that with technology like this, we are able to create technical products that are so easy and intuitive to use that everyone — even fish — understands immediately what it’s all about,” de Wolf said.