Our mouths were left hanging wide open after Beyoncé’s racy opening Grammys performance, but now we’re having a hard time lifting our jaws off the ground, thanks to the barely-there white gown she slipped into for the actual awards ceremony. Holy smokes, y’all!

Roses are red, violets are blue and this floral gown is frankly just too good to be true! It’s hard to believe that Beyoncé was ever pregnant after she showed up to the Grammys looking like a total sexpot in a white-hot, sheer Michael Costello gown. 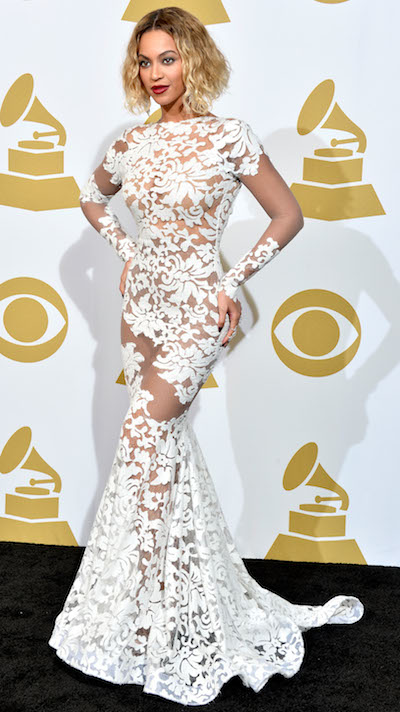 The dress, which fit her like a second skin, left hardly anything to the imagination. With a bangin’ body like Queen Bey’s, though, um, who really cares?

Beyoncé decided to ditch the wet curls she rocked earlier on in the show, trading them in for a much bouncier and drier version of the same style — a look we loved even more. As for her makeup, she went with a classic dark-red pout paired with a smoldering smoky eye that really set the entire look off, if you ask us. 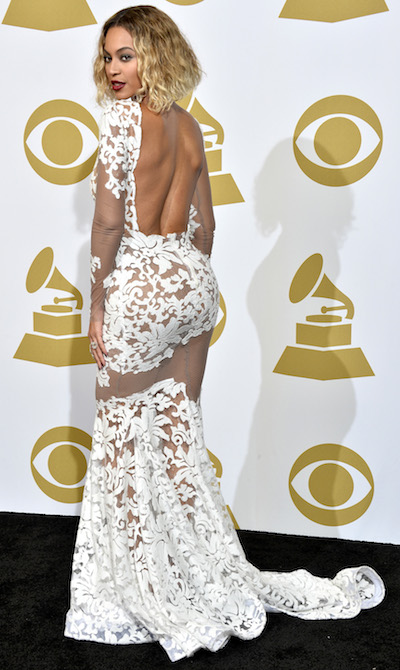 Believe it or not, Beyoncé wasn’t always that into fashion. In an interview with InStyle magazine, she confessed to growing up as a total tomboy. “I refused to carry a purse and wouldn’t wear a dress,” she said. “That was the eighties and it was all about the hip-hop influence — baggy jeans and big shirts. But then I started singing and ended up watching all of the footage of the Supremes and Tina Turner. And I thought to myself, ‘They’re so beautiful. I want to be like them.'”

Beyoncé has clearly become a style icon and legend in her own right.