Celebs broke out their best designer gear for the 2014 Grammy Awards, but Lorde’s simple style left the biggest impression on us. 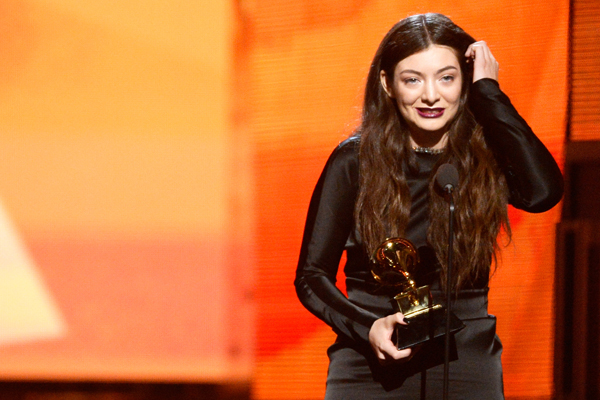 While most of the stars at the 2014 Grammy Awards opted for shine and sparkle, 17-year-old phenom Lorde opted to stick with her trademark black wardrobe and dark lips.

One thing was notably different, though: her hair! The New Zealand native opted to straighten her naturally-curly strands into loose waves. Her hair — along with her black satin dress — was the perfect choice for her moody performance of “Royals.”

We doubt the curls are gone for good, though. The singer is known for her low-key style — and frequent trips to the thrift store.

“I love thrift shopping,” she recently told MSN. “You can get 10 things because everything costs, like, $3. I feel weird spending money on myself — my first big purchase will be a double bed! I like simple clothes, but sometimes I’ll go for a goth-witch vibe.”

She might be a style icon to millions of teen girls, but she’s influenced by another teen trendsetter: Rookie magazine creator Tavi Gevinson… and disco icon Grace Jones.

“She had all this crazy thrifted stuff, and so I would thrift and try and look like her,” Lorde said of her style influence. “Grace Jones was an influence, because I was like, ‘These shoulders! These pants! Girls can wear pants and be awesome.'”

Do you like Lorde’s hair straight or curly? Sound off below!