Katy Perry gave off a very distinct vibe with her 2014 Grammy Awards look. We wonder if she’s trying to send a message to boyfriend John Mayer? 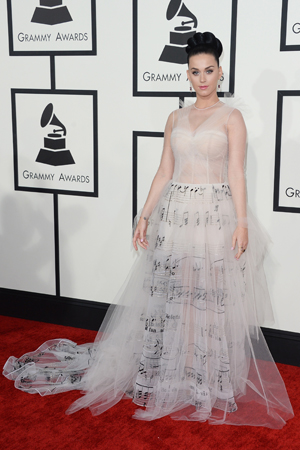 Queen Latifah is set to marry 34 couples onstage at the 2014 Grammys, and if we didn’t know better, we’d think Katy Perry was one of the brides-to-be. She’s definitely got the dress for it.

Seriously, though, the “Dark Horse” singer walked the red carpet wearing a gauzy white gown by Valentino that really reminded us of a wedding dress. The dress — right off the designer’s haute couture runway — also featured musical notes on the full skirt.

She might love it, but fan reviews are mixed.

“This wasn’t the type of Katy Perry dress I was looking forward to,” YouTube sensation Kandee Johnson told SheKnows. “I know it was Valentino, but it looked gauzy and didn’t translate well to the red carpet.”

We wouldn’t expect anything less than showstopping from the singer who once told Cosmopolitan that she loves “having fun” with her looks..

“I want to present myself as a human being, with lots of different aspects that aren’t necessarily perfect,” she said. “I think it’s totally fine to accept everything you have if you can. It’s good to try and have a certain grace with everything, but a sense of humor is most important. I try not to take myself too seriously.”

Did Katy Perry get it right with her 2014 Grammy Awards dress? Sound off below!

Pregnant Ciara glows in gold at the Grammys
Colbie Caillat wows in a ravishing red dress at the Grammys
Get the look: Sofia Vergara’s Golden Globes makeup