It’s always fun to feel like you’ve discovered a great gem that not many others know about — especially when you’re in a world-famous city! You don’t have to go far to find great experiences, just a little off the beaten path.

Whether it’s your first trip to Rome or your fifth, there’s something magical about exploring the city’s historical treasures on your own. But that doesn’t mean you have to pass up the world-famous sights or the city’s fantastic food, or compromise on where you stay. It simply means that sometimes, it’s nice to wander off the beaten path, even just a little. 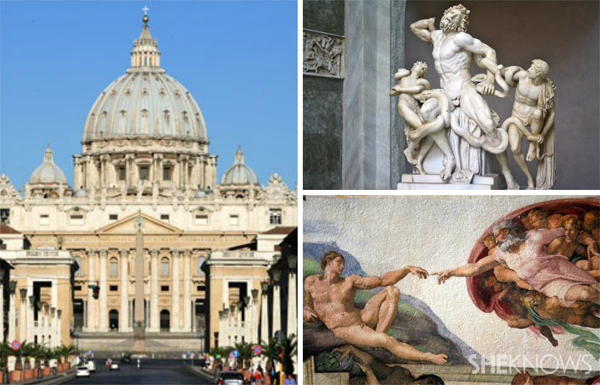 A visit to the Vatican can be awe-inspiring or overwhelming. You could end up spending your precious travel time standing in an extremely long, winding line, waiting to get your chance to be shuffled through the Vatican’s magnificence along with the masses.

Overome is a small, woman-owned business that offers exceptional tours of the Vatican, as well as many other destinations in Rome and just beyond. Overome’s tour of the Vatican (which includes the Vatican Museums, Sistine Chapel, Raphael Rooms and St. Peter’s Basilica) is anything but ordinary. After meeting up with my guide outside the Vatican Museums, I found myself part of a small group of other travelers (Overome is unique because it purposely keeps tours small, with a maximum of 12 people in each group). We discovered that our guide was an archeologist by profession who had actually spent time working at the Vatican. Talk about first-hand knowledge! In fact, all of Overome’s guides are licensed as guides, and have professional backgrounds in disciplines like art history and architecture, and are fluent in English.

To start our journey, we bypassed the extensive line of unprepared visitors and headed directly into the Vatican Museums. Our guide revealed the history and classic facts about what we were experiencing, but she also delved into stories, information, and off-the-cuff details about our location and works of art, pausing in places where others aren’t able to, and easily answering questions thanks to our intimate group.

You may be surrounded by a crowd on this tour, but you’ll feel like you’re simply with a friend in-the-know, walking through and learning about ancient history. Overome offers tours of many major Roman sites, as well as one in the ancient city of Ostia, just about 30 minutes outside Rome. Book a tour with Overome. 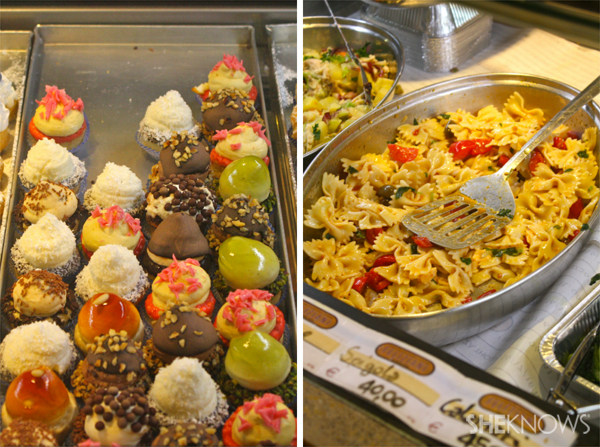 After spending several hours walking among the wonders contained within the Vatican, I can guarantee you’ll be famished. That’s what the vendors who circle the perimeter of the grounds count on.

Don’t be tempted to bolt to the nearest cart on the sidewalk or stand in line at the closest restaurant. Within about three blocks of the Vatican Museums stands a restaurant at the ready to serve delicious and authentic Roman food, drinks and, of course, dolci (sweets) at reasonable prices.

You can’t see Forno Feliziani from outside the Vatican Museums, but it’s worth walking the few blocks to this cozy and out-of-the-way — though nearby — eatery. As you walk through the restaurant’s narrow doorway, you’ll be struck by the number of Roman-style pizzas, pasta dishes and desserts on display behind the counters.

You’re probably familiar with thin, round Neapolitan-style pizza with a wide crust, but Roman pizza has its own qualities: think chewy, soft dough and generous toppings of meats, cheeses and vegetables. Roman pizza is formed in a rectangular or oblong shape, and when you’re served a slice, the piece is long and narrow. The pizzas at Forno Feliziani (yes, I had more than one type — don’t judge me) are hearty and delightful, as is the pasta. Whether or not you have room, there is no way you’ll be able to leave the restaurant without having a bit of dessert. From cookies to fruit tarts to cream-filled, flaky pastry, you’ll find something delightful to try.

The Knights of Malta and the secret keyhole view 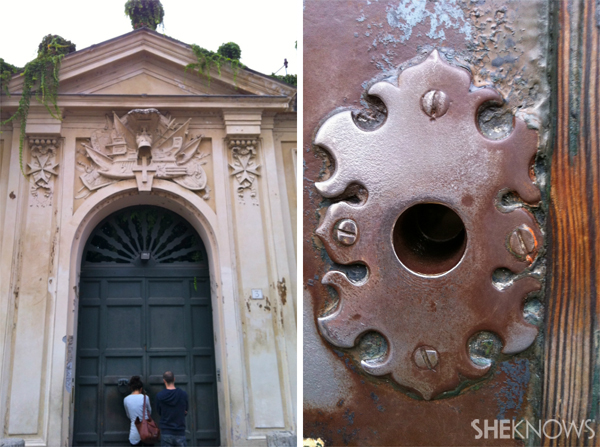 You’ve traveled far to an ancient and extraordinary city. If someone told you that peeping through a secret keyhole on a door tucked in a Roman neighborhood would be an amazing experience, what would you think?

The door in this case is in the Piazza Cavalieri di Malta on Aventine Hill in Rome. You won’t likely pass it while sightseeing, and it’ll only take a few seconds to take a peek, but you’ll discover a dramatic vantage, almost like a trompe l’oeil painting.

I took a taxi to the spot (which was also intriguing to my driver who had, surprisingly, never seen this view before), took a look, then was on my way. 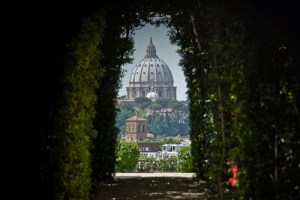 Just past the doorway in the Piazza is a villa that is home to the Order of the Knights of Malta (I Cavalieri di Malta), an ancient religious organization that dates back to the Middle Ages. With its headquarters in Rome, not Malta (the Republic of Italy recognizes the spot as a sovereign nation), the villa is home to the Order’s ambassadors to Italy and the Holy See. That means there are actually three nations within Rome: Italy (of course), the Vatican and the Knights of Malta.

When you peek through the keyhole, you’ll find an amazing view that sweeps beyond the villa’s garden and directly onto the dome of St. Peter’s Basilica at the Vatican, all the way across town. Think of it this way: You’re in Italy, standing in Malta (basically), looking onto the Vatican. It’s like being in three countries at once!

If you take a taxi to Le Stanze di Federica, a luxury boutique hotel, you might think the driver has the wrong address. You won’t see a street-side lobby where you’d make a grand entrance or a well-lit sign that welcomes you. You won’t likely see tourists gathered out front, making last-minute plans for the day, either.

Before entering the hotel that’s situated on a side street, you’ll find a large wooden door (and a small metal sign with the name of the hotel) awaiting your arrival. It’s the kind of door you’d find as the facade to an apartment complex or offices. That’s because Le Stanze di Federica is located in just this type of area.

Past the wooden doorway is a lovely stone-covered courtyard overflowing with greenery and surrounded by several freestanding buildings. Once in the right building, you’ll make your way into a tiny elevator (I discovered most building elevators in Rome are tiny) that will take you up several floors to where the hotel awaits. You’ll pass a few attorney and accountant offices, and at the end of hall (and at the top of a curvy marble staircase) is Le Stanze di Federica.

This luxury hotel is gorgeous, although quite small. In fact, there are only a handful of rooms here. But you’ll find 24-hour reception, friendly and helpful service, clean and modern rooms, free WiFi and complimentary coffee and pastry in the mornings. There are many shops and restaurants in the neighborhood, and you’re also within walking distance of many sites, like the Piazza del Popolo, Villa Borghese gardens and the Spanish Steps. Book a room at Le Stanze di Federica.