Oops… even celebrities get it wrong sometimes! We’re telling you why Emma Thompson and Kerry Washington’s SAG Awards fashions fell short in our weekly feature. Learn from the stars’ sartorial slip ups! 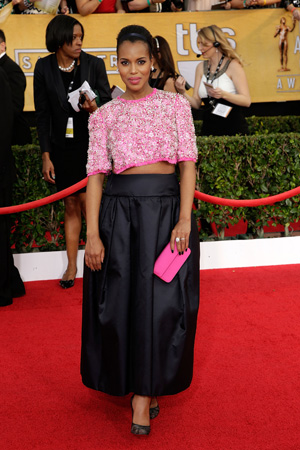 Maybe someone should have told Kerry that when you have a baby on board, it’s probably not the best time to try a midriff top? It also seems too casual for the SAG awards, and would be more appropriate for a nightclub opening. The intricately detailed pink top is pretty but it doesn’t seem to match with her billowing black skirt.

The final verdict? We’d like this look more if she ditched the witchy-looking skirt and wore a dress made entirely of the pink Prada material on top. Her matching pink clutch is a nice addition and so is the baby she’s got on board, so congratulations, but let’s leave the crop tops to show off your post-baby body, shall we? 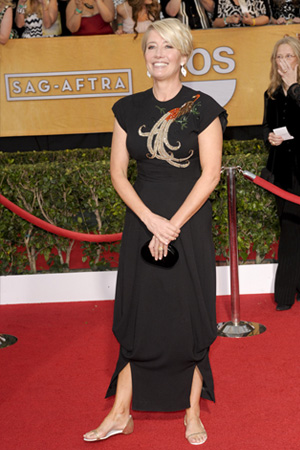 Oh, Emma Thompson! You usually make us laugh with your razor sharp wit during awards shows, but this time, we’re giggling at your zany fashion choice. Emma attended the SAG Awards wearing a dress that looks like Maria von Trapp fashioned it from the drapes in The Sound of Music and (gasp!) flats.

Let’s talk about that black dress. What exactly is embroidered on it… a peacock? An octopus? A feather duster? It’s tough to say, and while the embellishment on top isn’t our favorite, it’s the curtain-esque hemline that’s really got us scratching our heads. Could Emma not decide how much leg she wanted to show, and opted for a version that would allow her to raise and lower the length of her dress on a whim?

The final verdict? It seems Emma really wanted us to see her shoes, flats from Christian Louboutin. Yeah, we didn’t know the famous designer (known for his sky-high heels with red soles) made flats, either. Even though she’s the same person who presented barefoot at the Golden Globes, we say when you’re at a Hollywood awards show, you gotta suck it up and sport heels.