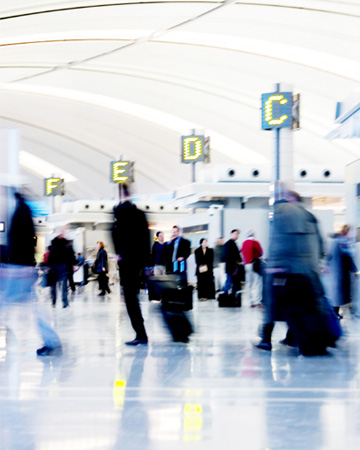 Today we stood next to one another in line at the Phoenix Sky Harbor airport, waiting to move through the security checkpoint. You probably don’t remember me, but I will never forget you. I was the woman with the frazzled hair, the sweat-dripping brow and the large plastic bag — the latter of which was clearly unplanned. I was the woman in the back of the line who thought she had adequately prepared for her business trip but quickly discovered she hadn’t. You, on the other hand, were composed, collected and early for your flight. You owed me nothing. You didn’t have to help me, but you did — and I don’t know how else to say thank-you.

You see, this all began last night as I was packing for my trip. I wanted everything to be in order and nothing to be overlooked. I wanted to wake up this morning, throw my hair into some elegant curls and put my best self out into the world — but when I discovered my single oversight, all of my planning was for naught.

Business cards. An entire box full of them sits in the upper right-hand drawer of my desk at work, yet somehow, only three of them made it into my wallet. Three business cards for a business convention. Three opportunities to spread the word about SheKnows and network with other media outlets. Three. Only three.

That’s where everything went wrong. Instead of heading straight to the airport, I was left with no choice but to drop by the office to pick up more cards. I left my home at 8 a.m., arrived at my office by 9 and then was off to the airport, arriving at Sky Harbor at 9:45.

The ticket in my hand explained that my flight departed at 11:05, but what I hadn’t noticed was the boarding information: 10:25 a.m. That was the time I should have referenced in all of my planning, but I didn’t.

But it didn’t stop there. While checking my bag, I was informed that my items were too heavy. Fifty-seven pounds was seven pounds too much, which is why when you met me, I was carrying seven pounds worth of my luggage in a plastic trash bag. It’s also the reason I was twitching anxiously as we wound in and out, moving like snails through the security checkpoint line. Perhaps I looked desperate enough that you took notice of me, standing amid hundreds of other travelers. Maybe you caught how frazzled I appeared and wondered if something were wrong.

I don’t know your reasoning, but somehow, you were kind enough to offer me your place in line, there at the front, where I would be called next. For some reason, you were willing to ignore the angry stares you received from the other travelers, who were also waiting and had also prepared for their flights by arriving early. For some reason, unbeknownst to me, you offered kindness to a complete stranger, which leads me to suspect that you helped me because you are simply a good-hearted person who gives back to the world she lives in.

I don’t know your name, where you live or how to get in touch with you. If I did, then this thank-you would be sent to you personally. But whoever you are, wherever you are, I wish you could know how much your good deed meant to me.

You see, as I neared Gate 23 today, an announcement blared through the loudspeakers. “Final boarding call for flight XYZ to Detroit,” it said, and I began running when I heard it.

I waved my arms like they do in the movies, hauling my ridiculous garbage bag full of luggage like a fool. “Wait!” I called. “That’s my flight! Please, don’t leave without me!”

When I boarded the plane, I thought of you. When I landed in Detroit, I thought of you, too. And when I handed out my fourth business card this evening, I thought again of how a simple act of kindness literally saved me today.

And so, I say thank-you — whoever you are, wherever you are. Thank-you for being a beautiful, kind-hearted woman who makes this world a better place. I promise to pay this kindness forward.