Jennifer Lawrence surprised no one when she walked the red carpet at the 2014 Golden Globes in white Dior. 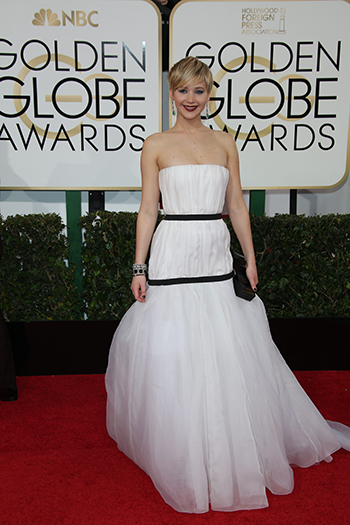 American Hustle star Jennifer Lawrence spent much of her time on the 2014 Golden Globes red carpet gushing about her new BFF, Taylor Swift. We love us some Taylor, but we really love the white Dior gown Lawrence wore on the red carpet.

JLaw paired her white Dior gown with dramatic makeup and a simple style for her newly-short strands.

The French designer is a mainstay for the actress: She’s served as the face for a Dior ad campaign and she’s worn the designer to several award shows and premieres, including the November Catching Fire premiere in Los Angeles.

The actress might have a lot of fashion clout these days, but it doesn’t come naturally.

“I’ve been able to find a way to get excited,” she told the U.K.’s Daily Mirror in 2013 of her fashion evolution. “I used to hate clothes and shopping and fittings, but I’m starting to like it now.”

And the clothes certainly love you, Jennifer!

What did you think of Jennifer Lawrence’s white Dior gown at the 2014 Golden Globes? Sound off below!