Cate Blanchett brings the drama to the 2014 Golden Globes in a black Armani Privé gown. 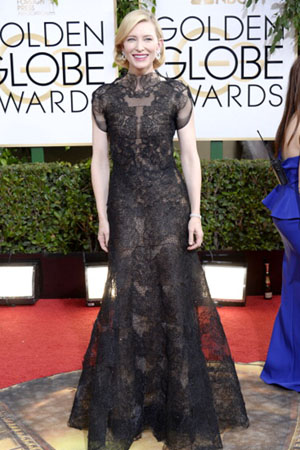 Cate Blanchett always looks so flawless that you’d assume her team spends hours contemplating her gowns, makeup and hair. In reality, she always looks flawless because she doesn’t think too much about her red carpet look.

The Blue Jasmine star told E! News that she spent “about a minute and a half” picking out the high-collared Armani Privé black lace and tulle gown for the 2014 Golden Globes.

The actress doesn’t let other people dictate what she wears, either.

“It’s like anything: You can’t make a film when there are too many voices, you can’t do a collection if there’s too many people trying to make it safe and trying to make it sellable,” she recently told Refinery29. “You can’t make anything worth anything out of a formula. It has to be risky, there has to be a sense of adventure and experiment in it.”

We’ve always got our eyes on Blanchett during awards season, but who does she look up to when it comes to fashion?

“Fashion is always so obsessed with the next thing,” she added to Refinery29, “but when someone who’s mid-career or late career is still doing something amazing — look at Bruce Dern or Judi Dench or Meryl Streep — and you’re still pushing yourself… that’s amazing.”

What are your thoughts on Cate Blanchett’s 2014 Golden Globes dress? Sound off below!