Maria Menounos lit up the red carpet in a pretty (sexy!) hot pink dress by Max Azria Atelier at the 2014 Golden Globe Awards. Complete with strategic cutouts and a flirty train, she definitely hit the nail on the head with this daring dress, don’t you think? 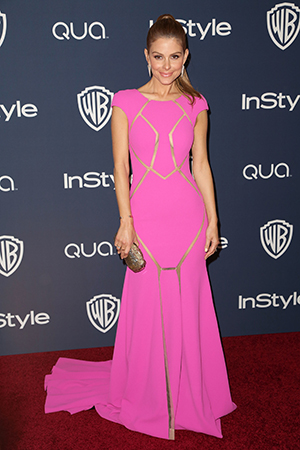 OK, so we don’t know about you, but we are absolutely head over heels for Maria Menounos’ pretty pink Max Azria Atelier gown at the 2014 Golden Globes Awards this year.

We think it strikes the perfect balance between racy and elegant, thanks to those barely-there all-over cutouts that leave just enough to the imagination.

Paired with a metallic gold Emm Kuo clutch, Jerome C. Rousseau shoes and standout jewelry by Jennifer Fisher, this is one look that will be hard to top tonight if you ask us.

Plus, how pretty is her pumped-up ponytail? It instantly glams up the entire ensemble without taking away from the main attraction: her dress, of course. Neutral makeup adds the finishing touches.

Good thing that pipe that busted earlier in the day on the red carpet didn’t mess up her photo opp!

The best ever celebrity hairstyles at the Golden Globes
Photo tutorial: Naya Rivera’s perfect waves at the People’s Choice Awards
Kat Dennings and Beth Behrs: 2 Stylish girls at the 2014 PCAs