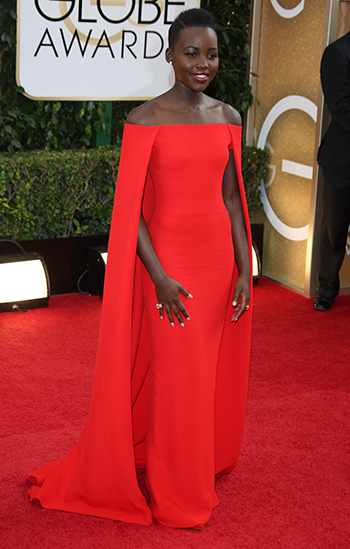 Get ready to add a new name to your list of celebrity fashion obsessions.

12 Years a Slave star Lupita Nyong’o is our early pick for best dressed at the 2014 Gloden Globes, thanks to the jaw-dropping cape dress she wore on the red carpet. The dramatic gown — from Ralph Lauren’s spring 2014 collection — showed of the Yale graduate’s toned shoulders and flawless skin without being too revealing.

Ralph Lauren isn’t her only fashion designer fan, though: She was just announced as the face of Miu Miu’s spring 2014 advertising campaign alongside Elle Fanning and Elizabeth Olsen.

Nyong’o appreciates the fashion cred she’s getting, but she didn’t set out to make style waves.

“I don’t Google myself too often — or at all. But I know from my friends and things I get an idea,” she recently told USA Today of the building online buzz about her on-point awards season wardrobe. The attention is “wonderful,” though.

“It’s definitely a bonus thing. It was in no way my agenda when I started.”

What do you think of Lupita Nyong’o’s red cape dress?