Girls star Allison Williams was — hands down the best-dressed star on the red carpet at the 2013 People’s Choice Awards. 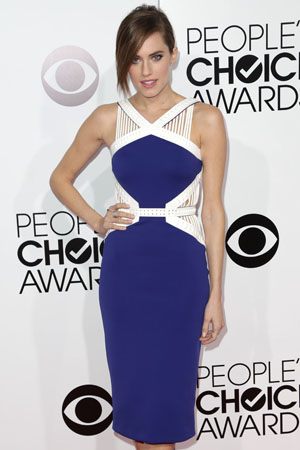 Girls star Allison Williams always knocks it out of the park when it comes to red carpet style and the 2014 People’s Choice Awards is no exception. While many celebs went casual in prints, the 26-year-old actress opted for a structured David Koma dress.

YouTube sensation Kandee Johnson even picks Williams as the best-dressed star on the red carpet.

“Allison Williams had the best dress of the night,” says Johnson. “It just looked like this piece of architecture, almost like you took a beautiful building and turned it into a dress.”

Can we expect more show-stopping looks from the tall brunette this awards season? The chances are pretty good, especially since she gets her style inspiration from another red carpet stunner, Jennifer Aniston.

“I wanted to establish a baseline: Here’s what I look like, I have long brown hair, I wear this kind of dress, this is the deal. You can count on it!” Williams tells Elle in a new cover interview. “Look at Jennifer Aniston: she’s America’s sweetheart for a reason. You know what she’s going to look like when she shows up to something, and there’s something so comfortable in that.”

See the rest of the best dressed from the 2014 People’s Choice Awards here.