Heidi Klum showed off an elegant high ponytail — and plenty of cleavage — on the red carpet at the 2014 People’s Choice Awards. 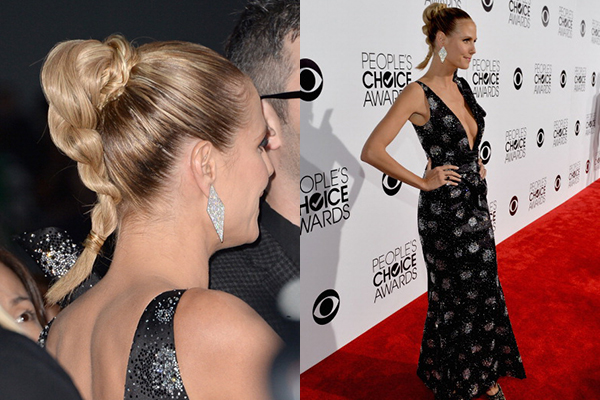 Casual was the word of the night at the 2014 People’s Choice Awards.

Celebrities opted to go for more casual looks on the PCAs red carpet — everyone except Heidi Klum, that is. The supermodel and America’s Got Talent judge went full-on glam in Armani for her awards show appearance, complete with serious cleavage and a sky-high twisted ponytail.

YouTube sensation Kandee Johnson was definitely a fan of the look, though she’s not so sure it’s the easiest style to wear.

“Heidi Klum’s high twisted ponytail looked very structural. It didn’t look very comfortable… almost like a sculpture,” says Johnson. “It almost looks like there was wire or something twisted in there to give it the structure.”

Klum’s high style is pretty simple to recreate at home. The secret to a perfect high pony is to place it somewhere above the occipital bone, but below the top of your head. Divide the ponytail into two sections and twist as tight as you’d like and secure with an elastic band at the end. Wrap a lock of hair around the top and bottom of the ponytail for a bit of extra glamour.

What do you think of Heidi Klum’s high twisted ponytail? Sound off below!

60 mins ago
by Kristine Cannon