Oops… even celebrities get it wrong sometimes! We’re telling you why Katy Perry and Kristen Wiig’s fashions fell short in our weekly feature. Learn from the stars’ sartorial slip ups! 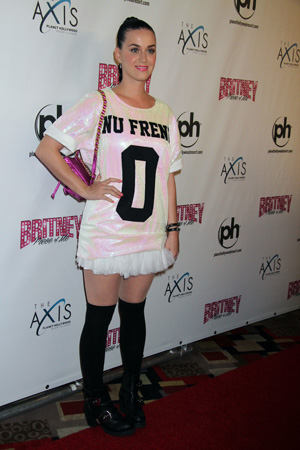 We sincerely hope that Katy Perry‘s New Year’s resolution is to fire her stylist because she’s been our most frequent Fashion Fail of 2013! The repeat offender wore this hot mess to Britney Spears’ first Las Vegas performance, but she looks like she’s going to a powder puff football game.

The “Unconditional” singer paired an oversized baby pink jersey with a tutu. To up the fugly factor, Katy added chunky boots and knee socks. And is that a mini backpack she’s sporting?! The ’90s called and they’d like their fashion back. There’s a difference between being quirky and unique and just wearing a ridiculously bad outfit. Her career and love life are flourishing, but her fashion sense needs serious help.

The final verdict? Katy is a gorgeous girl and we love her music but we can’t understand why she dresses so poorly! Like the number on her jersey, we give this look a big fat zero. 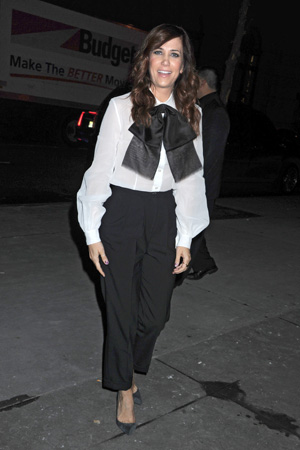 What was Kristen Wiig thinking when she stepped out in this odd ensemble? The actress wore a black, white and totally oversized getup to The Secret Life of Walter Mitty premiere in NYC. Check out how puffy her sleeves are on her collared shirt… was she hiding snacks for the movie in there?

The Bridesmaids star also added a huge black bow tie to her menswear-inspired mess, which featured high-waisted cigarette-style pants that also look too big for her frame. It looks like she’s channeling a clown instead of heading out to walk the red carpet at her big movie premiere.

The final verdict? There’s really nothing redeeming about this unflattering attire. Remember the infamous puffy shirt on Seinfeld? It looks like she borrowed this from Jerry Seinfeld’s closet. Unless the funnylady wants people laughing at her, she shouldn’t wear this look again.