Now that we chicks are the breadwinners in so many families, it’s easy to forget how many jobs we couldn’t get hired for. These eight career choices are now an option, thanks to the glass-ceiling-bashing gals who came before us. 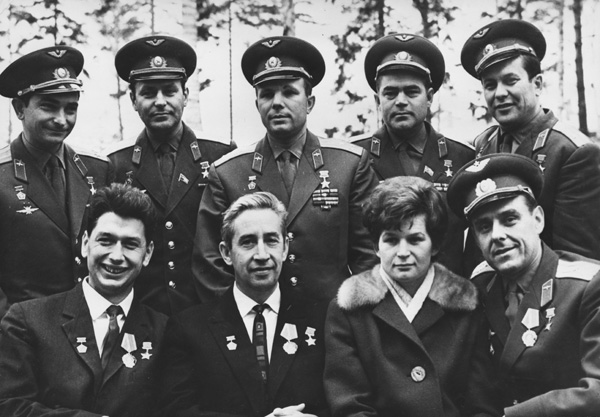 When most people think of astronauts, they think of Buzz Aldrin, Neil Armstrong and (if they’re uber-nerds) Yuri Gagarin. But only two years after Gagarin became the first man in space, Valentina Tereshkova became the first woman in space, meaning women have been boldly going since 1963. Since that time, Sally Ride and 55 other brave and powerful women have broken the exosphere… as compared to 564 men. Either way, beat that, Michael Jordan.

CEO or other executive

Along with women’s new stronger role at home (primary caregiver, primary wage-earner) comes a perk that few, whether male or female, ever experience — executive officership. Women are landing CEO and other executive positions at major organizations left and right.

Marissa Mayer moved from a top slot at Google to the top slot at Yahoo and the CEO of a little thing called Facebook, and has earned the company a little cash by way of mobile ad revenue (18.4 percent of the market) since her induction. In fact, the automotive boys’ club just got a rude awakening with the appointment of Mary Barra as CEO of GM.

Even though women are slightly more than 50 percent of the population (whom the gender marketers bow to in advertising because we “hold the pursestrings”), historically we have been underrepresented in high-powered government positions. Thanks to the likes of Hillary Clinton, Madeleine Albright, Condoleezza Rice and up-and-comers Kirsten Gillibrand and Wendy Davis, we’re pretty confident that the White House will take on a hue of presidential pink sometime in the next 10 years.

Given the obvious assumption that women cook and clean, we know you’ll find this one amusing. Up until recently, despite many a man’s assertion that he “can’t cook,” apparently, this field is dominated by the not-so-weaker sex. From a recent Time magazine article, you’d think women didn’t even know how to cook. We’d give you a link, but you have to be a subscriber, which is fair. (But here’s a hint: They’re all men. Guess they’ve never watched the Food Network.)

Women have been playing basketball since the 1890s, when Smith College introduced the sport. Since then, the popularity has increased steadily, spiking in the 1980s, when the NCAA began sponsoring the sport. These superwomen (almost literally, as many of them are also super-strong) now have their own pro league, the Women’s National Basketball League, that gets ESPN time, too.

Back in the day, something as “coarse” as making alcohol was a man’s game (probably not really, but a lot of stand-up guys likely went to jail for their honeys, so we’ll go with it). These days, women are bringing their culinary chops and money-making know-how to the brew world in a big way. Julie Hertz is the craft beer program director at the Brewer’s Association; Wendy Littlefield is the cofounder of Vanberg & DeWulf, and helped pioneer the importation of Belgian artisan ales (thank you, Wendy!); and the VP of marketing for one of our fave craft breweries, Dogfish Head, is the one and only Mariah Calagione.

The big, bad world of sports is no match for a woman. We may not play much football, but that doesn’t mean we don’t know just as much about how it works as the boys do. Unfortunately, if you google “female sportscasters,” you’re inundated with list after list of who’s hottest. Good news is, if they had to make a list of 25 of the hottest, that means there are plenty more who didn’t make the list.

Despite the long-standing myth that women can’t drive, gals have been making some significant advancements in the field of, well, driving. From NASCAR to IndyCar, the ladies are proving that anything boys can do, girls can do, too.

More reads for the career gal

How to set pricing for your home-based business
Do work-at-home-moms really need websites?
Everything I learned about running my business… I learned from Gordon Ramsay

This Cult-Favorite Hair Styling Tool With Over 300,000 Reviews Has Been Called a ‘Dream Come True’ & It’s Only $32 Right Now