Oops… even celebrities get it wrong sometimes! We’re telling you why Kim Basinger and Kristen Wiig’s fashions fell short in our weekly feature. Learn from the stars’ sartorial slip ups! 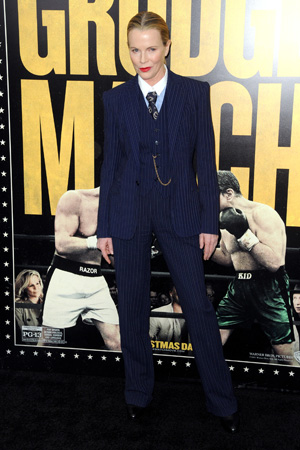 Menswear-inspired fashion is a huge trend, but it looks like Kim Basinger may actually be wearing guys’ clothing for the premiere of Grudge Match in NYC. Did her stylist have a grudge against her and put her in this outfit as revenge? Did she get former husband Alec Baldwin’s old suits in their divorce settlement and decide to try one on for size?

This pinstriped number is by Ralph Lauren, and we’re not sure any woman ever needs to be wearing a three-piece suit. A tailored jacket and matching pants, yes, but this is overkill. To further remove any traces of femininity for the evening, Kim added a tie and a pocket watch. The former Bond girl tied back her blond tresses in a tight ponytail and minimal makeup.

The final verdict? Kim’s one of the most gorgeous women out there, so we’re confused as to why she wants to look like a mobster man so badly. We’re all for trying the menswear trend and mixing it up, but don’t forget you’re a beautiful female! Her severe hairstyle and bright lip are doing nothing for her famous face, either. 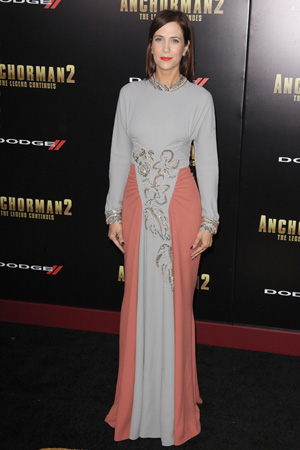 We’re sure Kristen Wiig will be absolutely hilarious in Anchorman 2: The Legend Continues, but the multicolored dress she chose for the NYC premiere of her latest movie is no laughing matter. The 40-year-old actress hit the carpet in a pastel Prada creation with an embellished neckline, cuffs and waist, and the whole ensemble completely dates her.

The mock turtleneck top and the bedazzled cuffs are frumpy. When combined with those spangly floral-shaped decorations in the midsection, it seems like something she found while playing dress up in her grandma’s closet. This dress might be considered sexy if you’re a senior citizen, but hasn’t Kristen heard 40 is the new 30?

The final verdict? The contrasting coral pieces on her hips are doing nothing to show off the Saturday Night Live funnylady’s great figure. This gown needs a lower neckline, a higher hemline and one continual color throughout to change this into a do instead of a don’t. Also, her hair could use some volume, stat!