Do you have what it takes to change the way we use our gadgets? These seven women are some of the most power technological titans in the world.

Times, they are a-changin’! In the past, women have been grossly underrepresented in the technology sector, from engineering to major websites, but earlier this year, InfoWorld reported that thus far in 2013, a vast majority of the new hires in the tech sector have been women according to the U.S. Bureau of Labor and Statistics. To celebrate, we’ve rounded up a list of seven inspiring figures in the field. 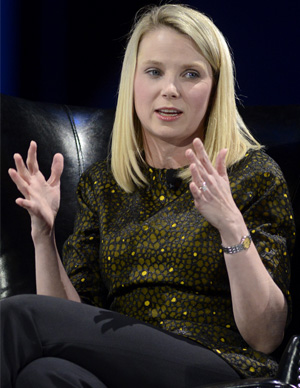 In 1999, Marissa Mayer became the 20th employee and first female engineer of the now ubiquitous Google. She worked her way up the ranks from engineer to designer to product manager, eventually landing a coveted executive position, where she became the company’s key spokesperson.

Recently, Mayer lit up the nerd-osphere when she left her long-time position to take the reigns at Yahoo as president and CEO. In 2013, she was ranked No. 8 on Fortune’s list of most-powerful businesswomen in America.

We can see why. According to the Huffington Post, Yahoo is currently beating Google in traffic. We’re not sure what she’s doing right, but Google had better figure it out — fast!

Wouldn’t it be awesome if you could open an app on your smartphone and know exactly how much energy every electronic device in your home was using? Suzanne Russo thinks so. This green goddess is the brain behind Pecan Street Research Institute, where it has outfitted 1,000 volunteer homes with advanced energy-monitoring equipment. Better yet, Russo’s organization has just started gathering data from lower-income individuals, who are usually left out of the equation when it comes to technology advancements.

Padmasree Warrior was born and raised in southern India. After obtaining her bachelor’s degree, Warrior earned a master’s in chemical engineering from Cornell University. She started her career at Motorola as one of only a handful of women working at its Arizona branch. She’s now been with the company over 23 years, working on a multitude of cool projects, including a stint as the corporate VP and chief technology officer in the semiconductor products sector.

Current CEO John Chambers has put Warrior’s name at the top of the list of his successors, saying to Forbes, “Warrior is among the sharpest technology persons in the world.”

One of Bloomberg TV’s women to watch, SurveyMonkey’s Selina Tobaccowala got her job with the leading creator of web-based surveys while she was pregnant with her first child in 2009. Fast-forward almost five years, and she now leads a team of engineers in creating online solutions to offline problems with a focus on putting the end user first.

Tobaccowala has been programming in high-level languages, like Pascal, since the tender age of 10. She started a company we’ve all heard of, Evite, from her dorm room in college.

COO of Facebook Sheryl Sandberg has been with the company since 2007, when she met founder Mark Zuckerberg at a Christmas party. The rest, as they say, is history. Her purpose at the company was to take a “really cool site” and make it profitable, and that she has.

After adding ads to the mobile newsfeed, the company earned an impressive 18.4 percent share of all mobile advertising revenue. Her book Lean In: Women, Work and the Will to Lead, a follow up to her 2010 TED Talk, sold over 150,000 copies in its first week.

Rashmi Sinha cofounded SlideShare, an online method of sharing Word, PowerPoint and other presentations, which was sold to professional social networking powerhouse LinkedIn in April 2013 to the tune of $119 million.

But Sinha’s background isn’t in programming. Indeed, she has a doctorate in neuropsychology from Brown University. After creating MindCanvas, a game-like survey platform used for customer research, she was apparently bitten by the tech bug. Fast Company recently named her one of the World’s Top 10 Women Influencers in Web 2.0.

This up-and-comer may not have achieved what all the other ladies on this list have… yet… but it’s only a matter of time. Brit Morin, called “a millennial DIY-er with the digitized touch” by The New York Times, isn’t quite 30 yet, but she’s already making headlines as this generation’s Martha Stewart meets Marissa Mayer. Her company, Brit + Co., is dedicated to making all things DIY available online. Her staff makes its home away from home in 9,700-square-foot headquarters. Not too shabby.

Hottest careers for women in 2013
Stay at home, work from home or career gal: The financial impact
Meet your career goals this new year

5 mins ago
by Taylor Lane