Don’t let Russell Brand have all the fun! Sprinkle these 31 words into your conversations to help you sound smarter and more sophisticated than ever.

Related story What Are Nootropics & Should You Be Using Them? 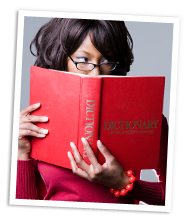 A word
a day for the glottologist

Don’t let Russell Brand have all the fun! Sprinkle these 31 words into your conversations to help you sound smarter and more sophisticated than ever.

Do you want to sound smarter? We’re bringing you one word a day for the month of March. The challenge? Use the word of the day in a sentence at least once each day.

A person who studies language

A true glottologist, Amy was the queen of Scrabble.

I’m a great cook, but my boyfriend would cachinnate at the thought of my doing the dishes.

Origin: From the Latin cachinnatus (to laugh aloud)

Easy in actions or manners, typically in a thoughtless or superficial way

When asked about his history of drug use, Bill Clinton glibly noted that he’d never inhaled.

Origin: Probably a modification of the Low German glibberig (slippery)

Something loathed, disliked or abhorred

Joan Rivers put the actress on her worst-dressed list — which isn’t surprising. That dress was an abomination!

Origin: From the Latin abominatus (loathed)

Tracy decided to unfollow everyone on Twitter who wasn’t a fidus achates.

Origin: Latin description of the character from Virgil’s Aeneid who was the faithful companion of Aeneas

An individual who flatters another (usually a superior) with the intention of elevating his or her place in the hierarchy or attaining a personal goal; a self-serving parasite

Origin: From the Greek sykophantes (slanderer)

RuPaul is well known for her ostentatious outfits.

Origin: From the late Middle English ostentation (to display or exhibit)

A cure-all or universal remedy; a magic potion

Elizabeth’s mother seems to believe chicken soup is a panacea.

Origin: From the Greek panakeia (all-healing)

Margot loves that her husband is so attentive, but others simply find him uxorious.

Origin: From the Latin uxor (wife)

Skilled or clever (in a specific skill)

Georgia is an adroit typist, clocking in at an average of 96 words per minute.

Origin: From the Old French a- + droit (straight, just, correct)

In the spirit of reciprocity, Kayla bought Steven lunch for his help on her project.

Origin: From the Latin reciproc

An object or material that changes in color or luster

Nancy’s eyes were positively chatoyant, appearing either green or blue, depending on the color of her clothes.

Origin: From the French chatoyer (to change in color, as a cat’s eye)

Before proposing to Behati Prinsloo, Adam Levine had a dalliance with model Nina Agdal.

Origin: From the Middle English daliaunce

Up next: More words to sophisticate your dialect >>