It’s almost that time to say good-bye to 2013 and prepare for the new year ahead. If you’re single and want to end the year on a high note, call your single girlfriends, pack your bags and head to one of these destination hot spots to celebrate New Year’s Eve in style. 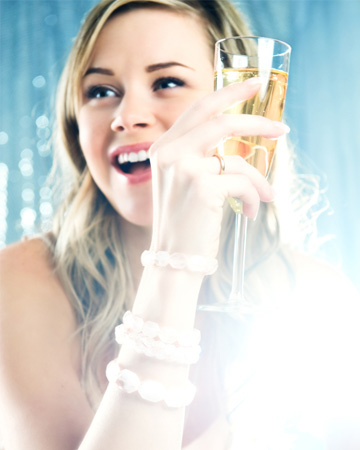 From fireworks over the Mississippi River to the annual fleur-de-lis drop and live entertainment, the Big Easy offers a variety of ways to celebrate New Year’s Eve. The party will be live, and the New Orleans’ bash will include the infamous 8-foot-tall by 5-foot-wide two-dimensional fleur-de-lis ornament drop followed by fantastic fireworks. Visitors can also enjoy free concerts in Jackson Square, dining at one of the city’s fine restaurants, riverboat cruises or a night of dancing in the French Quarter.

Make a pact with your girlfriends to bring in 2014 without any baggage by visiting Beale Street, where locals and visitors are invited to attend the Bury Your Blues event to throw away their “blues” into an open coffin. Continue dancing the night away at Handy Park, where 13 bands will perform. And visitors can view the giant 10-foot Gibson guitar drop at the Hard Rock Cafe followed by fireworks and other New Year’s Eve festivities.

Head to Atlantic City for a girls’ New Year’s Eve getaway, where they’ll be tons of shows, concerts, nightclubs and special events to make your holiday celebration memorable. Kick off the festivities with the Life in Color event on Dec. 28 at Bader Field, where high-energy music, legendary DJs, dance, art and paint are combined to create a one-of-a-kind live-concert experience.

Known as a city that never sleeps, Las Vegas is one of the most popular destinations for New Year’s Eve for a reason. Whether you’re looking to hang out in an upscale spot or enjoy a casual experience, Vegas has it all. Catch the amazing fireworks show at America’s Party on the Las Vegas Strip. People come from all over to view this free event, where fireworks are launched from the rooftops of the MGM Grand, Aria, Planet Hollywood, Caesars Palace, Treasure Island, The Venetian and the Stratosphere.

Pack your best black-and-white outfit and bring in the New Year Gatsby style at the Ritz-Carlton’s New Year’s Eve Black and White Gala. The luxury hotel in Florida will throw a party celebrating the Gatsby era of the Roaring Twenties, where you and your girlfriends can enjoy extravagant food buffets, dancing, live music and fireworks.

Create a memorable and unique NYE celebration in style when you take a ride on the Napa Valley Wine Train. Begin the evening at the station with wine and hors d’oeuvres before boarding the train for a twilight dinner through Napa Valley. Return to the station for the after-party, where guests can enjoy gourmet food, live music, dancing and a sparkling-wine toast at midnight.

Located in the East Village, Webster Hall is known as NYC’s largest and longest-running dance club. Webster Hall New Year’s Eve Ball will feature the “largest balloon drop in the free world” as more than 100,000 balloons will drop when the clock strikes midnight. The four massive floors will feature eight of NYC’s top DJs, a live broadcast of the ball drop in Times Square, firework displays, aerial performances and special guests. Because this vibrant celebration will go until noon on Jan. 1, continental breakfast will be available.

Spend your New Year’s Eve celebrating on the water with your girlfriends at Navy Pier, which is known as Chicago’s lakefront playground. Board the Mystic Blue and enjoy the Fireworks Dinner Cruise, which will include tasty treats, a champagne toast, spectacular views of the city’s skyline and a fireworks show. End the night with a 30-minute dockside party on the decks.

Come to this exciting party with your friends dressed as a group of sexy femme fatales. Held at the Washington Plaza Hotel, The 12th Annual James Bond 007 Thunderball black-tie party will make guests feel like superstars with red-carpet interviews and roving photographers. The hotel will be transformed into several international locations and showcase 007-inspired props from the James Bond movies. The party in the nation’s capital will also feature exotic cars, live music and several international buffets.

If you’re looking to escape a colder climate, you may want to head to Miami and bring in the New Year on the beach. The Orange Drive Music Festival’s New Year’s Eve Jam on the Sand will feature live musical performances between 9 p.m. and 2 a.m., and guests can also enjoy the free fireworks show at midnight on the beach.