SheKnows Editorial, Cristina Gibson
December 6, 2013 at 8:00am AM EST
Share

Oops… even celebrities get it wrong sometimes! We’re telling you why Katy Perry and Ke$ha’s fashions fell short in our weekly feature. Learn from the stars’ sartorial slip ups! 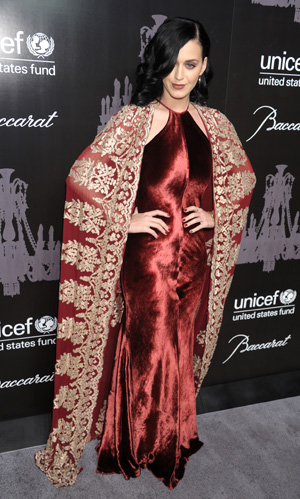 Katy Perry is a UNICEF goodwill ambassador, and for the 9th Annual UNICEF Snowflake Gala in NYC, the “Roar” singer decided to recycle in the name of charity and wear a tapestry she grabbed off her wall for the evening.

Just kidding, she actually chose a Naeem Khan burgundy dress and cape combo for the soiree that reminds us of a decorative wall hanging or an oriental rug. Let’s leave using curtains as clothing to Maria Von Trapp in the Sound of the Music, OK, Katy? We assume the singer was going for a festive, holiday look in that cranberry-colored dress, but the crushed velvet gown feels like a ’90s flashback. All she’s missing is a choker!

The final verdict? Capes are tricky enough to pull off when they’re not embroidered like this one. We would have ditched the cape altogether if we were her stylist. But her hair and makeup look great… we love that her lip matches her dress color. 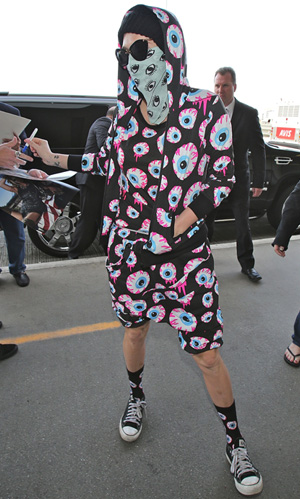 We get wanting to be comfy at the airport, but what pop star in their right mind would wear this to LAX, where you know the paparazzi will be waiting? If you guessed Gaga, you’re wrong for once. This walking fashion fail is actually Ke$ha… not that you could actually tell since she’s covering her face with a head scarf.

The “Timber” singer made sure all eyes were on her, literally, as she prepared to fly the friendly skies, wearing a hoodie, short and shirt combo all featuring big, bloodshot eyeballs. She also wore matching socks and sneakers and topped it all off by tying an eyeball-printed scarf and huge sunglasses. Speaking of shades, can we borrow hers? This outfit hurts our poor peepers.

The final verdict? Just because you may be hungover, Ke$ha, doesn’t mean you have to dress like the symptoms of too much partying and late nights. Someone get this girl some Visine and a velour tracksuit for future travel, please.

43 mins ago
by Taylor Jeffries

Hurry, These Cozy Shearling Birkenstocks Are Over 40% Off at Nordstrom for a Limited Time

1 hr ago
by Rebecca Padron