Oops… even celebrities get it wrong sometimes! We’re telling you why Heidi Klum and Rihanna’s AMA fashions fell short in our weekly feature. Learn from the stars’ sartorial slip ups! 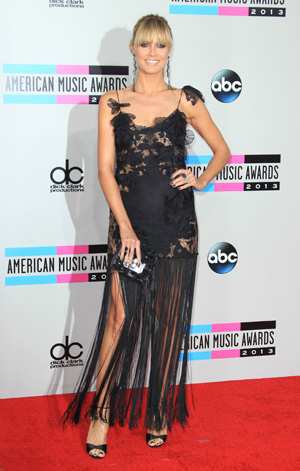 Heidi Klum was presenting to Justin Timberlake at the American Music Awards, so perhaps she was hoping to bring “SexyBack” herself in this dress? The supermodel mom of four chose a gothic Marchesa gown and Brian Atwood heels for the AMAs but we think this dress is a mess.

The top of her gown has floral embellishments and cutouts, but the floaty petal accents remind us of wet pieces of black tissue paper that got stuck to her. The bottom part is pure flapper style and straight out of the ’20s, but it seems mismatched with the sexy sheer side panels that show she definitely didn’t wear underwear.

The final verdict? There’s too much going on with this gown, and we think it would look much better minus the long fringe and with a solid lower half instead since there’s so much intricate detailing on the dress already. A plain ponytail also seems a bit basic for a nationally televised event where you’re introducing JT. 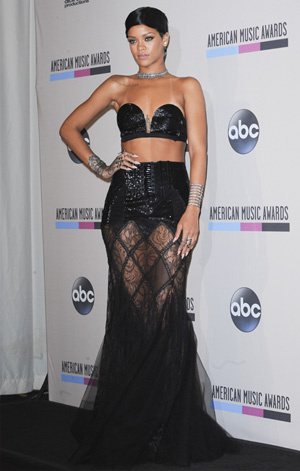 Rihanna really takes the expression “less is more” to heart… as in less fabric! The “Diamonds” singer wore a black crop top and revealing skirt that left little to the imagination as she scored the first ever Icon award at the AMAs. Midriff-baring crop tops are definitely in style right now but this seems more like Rihanna’s wearing a strapless bra.

She paired the cleavage baring piece with a high-waisted maxi length black skirt with a tulle train and sheer see-through panels that went all the way up to her crotch. We think she’d be better off picking one racy piece to rock: either the itty bitty top or the peekaboo skirt to avoid looking so exposed. Then again, this is Rihanna… modesty has never really been her thing.

The final verdict? At first glance, it looks like the Barbados-born babe is wearing her hair wrapped around her head in a tightly pinned style, but this is apparently a “doobie wrap,” an African American styling cap that people usually wear at home to preserve a hairstyle. We’re all for changing up your hairstyle, but on a night when all eyes are on you, maybe don’t leave home with the equivalent of rollers or a shower cap on top of your head?