Do you cringe with anxiety every time the possibility of a flight comes up? Learn how to zap this fear and start enjoying traveling! 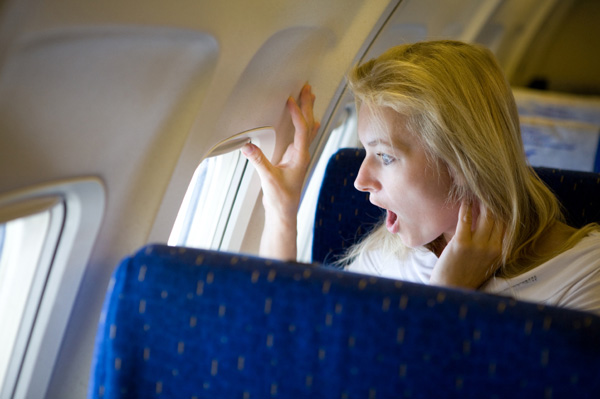 My husband is terrified of flying — so much so that we’ve never been on a flight together. If we were to ever fly, he’s already informed me that he’ll need a lot of liquid courage just to get on the plane. While this may work, it’s not practical (especially if you have two kids in tow). Instead, it’s best to conquer the fear head on and learn to fly with ease.

Let’s look at the stats

Overcoming your fear of flying

Learn about airplane safety. Before your flight, read up on stats like the ones above. Find out why traveling by plane is one of the safest modes of transportation. By being rational, you have a better chance at overcoming your fear.

Did you know? The only modes of transportation safer than airplanes are elevators and escalators!

Bring a book. Instead of viewing the flight as a gigantic tube flying through the air tackling turbulence, view the flight as a place for you to relax — because it is! Get caught up on the latest celebrity gossip in your favorite magazines, or read that book you haven’t had the chance to get to yet. If you have kids, and they won’t be on the plane, this is your chance for some much-needed alone time. Don’t let anything — even your fear of flying — get in the way of that!

Seek treatment for anxiety. Most people who have a fear of flying report tremendous anxiety before boarding a flight. Get professional help a few months beforehand. Learn coping strategies, such as breathing techniques, attend group therapy sessions or get medication.

Think about the destination, not getting there. Traveling is fun! Even if you’re flying for a work trip, chances are you’ll get to see and experience a new and exciting place. Focus on the big picture, and don’t even think about the flight. If you find your mind wandering, immediately stop yourself and focus on something else.

Flying with baby: Make the process easier
How to beat the holiday madness when flying
Surviving a long flight: What to keep in your carry-on