Oops… even celebrities get it wrong sometimes! We’re telling you why Khloe Kardashian and Katy Perry’s fashions fell short in our weekly feature. Learn from the stars’ sartorial slip ups! 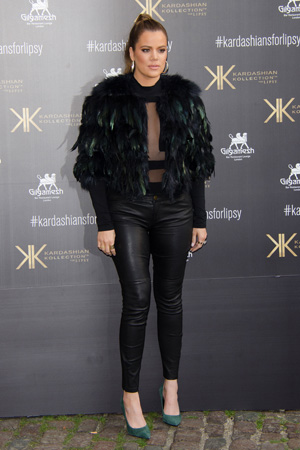 It’s a bird… it’s a plane… it’s Khloe Kardashian in London at a fan signing for her Kardashian Lipsy fashion line launch. Khloe may just be our favorite sister from the famous family for her razor sharp wit, but this leather and feather heavy look isn’t her best.

We’re not completely sure how we feel about the cleavage baring turtleneck top with sheer cutout panels because we can’t see the entire thing, but it has potential to be cute. But the E! reality star’s avian-inspired jacket is for the birds… or perhaps a performance of Black Swan. The feathers add bulk and make her look top heavy, instead of flattering her curves. Her leather pants also look too tight since they’re pulling all over the place. A designer should know that getting the right fit is key.

The final verdict? Khloe’s ultra-high tight topknot is too severe for our taste, and it looks like she borrowed her huge hoop earrings from Jennifer Lopez. However, we are pleased to see one accessory she’s sporting: her huge diamond engagement ring from Lamar Odom. The couple has been on the rocks recently, but looks like Khloe isn’t giving up on her marriage just yet. 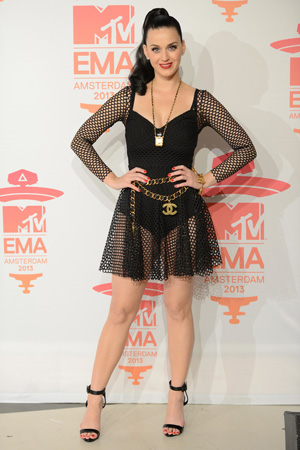 Here’s Katy Perry at the MTV Europe Music Awards in Amsterdam and we wonder what the “Roar” singer was smoking when she decided to wear this outfit. Katy chose a revealing black mesh bodysuit dress from Maria Escote’s Spring 2014 collection which she paired with tacky accessories.

Fishnets are for leggings, Katy, not entire dresses! Incorporating sheer or see-through elements is a major trend right now and can look right when done properly, but this leotard version reminds us of an aerobics video. The mesh sleeves are OK but we would have made the bottom of this skirt solid. John Mayer’s girlfriend also really wants us to know she’s wearing Chanel. She chose a chain belt with a huge dangling logo as well as a necklace with their No. 5 perfume bottle.

The final verdict? Didn’t wearing huge designer logos go out of style? Ease up on the Chanel. These accessories are actually expensive but they look cheap. But we must say Katy’s hair and makeup look fab and she won an award after performing, so well done on those fronts.