Travel is stressful and the holidays are even more stressful. Take a deep breath as you read these holiday travel nightmares! 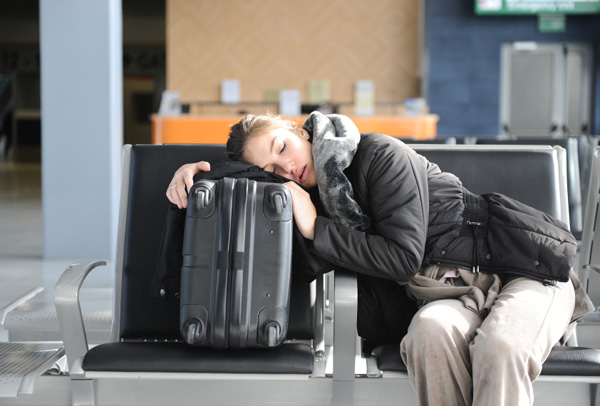 I’ve never once traveled over the holidays, and these stories reassure me that I’ve made the right decision time and time again.

Stuck in an elevator

Two Christmases ago, my family and I were in visiting relatives in L.A. We stayed at a tiny hotel and suddenly all four of us came down with the stomach flu. Our room was seriously like 400 square feet. You can imagine the mess and how disgusting it was for 48 hours. Well, once we were slowly starting to feel better, we went down to the pool to try and eat something, and the kids (ages 1 and 5) wanted to go swimming. The two boys and I got in the elevator to go get our swim suits. Well, on the way up, the elevator stopped. Let me remind you that we were all on the tail end of the stomach flu. And yes, we were stuck in the elevator, on Christmas Day, for over an hour — me and two little kids. The elevator repair man got lost, then couldn’t come because it was a holiday. Finally, the fire department came and broke us out of the elevator. Luckily, none of us had to puke until we got out of the cramped quarters. Best. Christmas. Ever.  — Michele

Broken-down car in a blizzard

It was Christmas Eve and my best friend’s brother (who I barely knew) was driving me home from college, since I didn’t have a car. It was an eight-hour drive, and we were in a blizzard. While driving down the freeway, his pickup suddenly broke down! We were in the middle of nowhere, still four hours from home. No mechanic was open on Christmas Eve and no one could come pick us up because the snowstorm was too dangerous. After waiting in frigid temperatures for a cab, we ended up sharing a room (because we were poor college students) in a seedy motel on the highway and ate gas-station Cheetos and beef jerky for dinner on Christmas Eve. — Christina

Kids on a plane

Five years ago my wife and I took our 3 kids (ages 7, 4, and 1 at the time) to visit my sister who lives in Sydney, Australia, for Christmas. Since they didn’t sleep much, we spent 16 hours on the plane keeping them entertained — a lot of walking the aisles, watching movies and playing games. The worst part was our 1-year-old, who was inconsolable at times. Things we let her do included eating patties of butter by themselves and kicking the chair in front of her because we were too exhausted to stop her. It was the plane ride from hell, and I never felt like more of a failure as parent in my life! —Kyle

How to travel with a toddler >>

Stuck in traffic for hours

One of my most frustrating travel experiences came on a Thanksgiving trip from Santa Barbara to Victorville, California. Traffic was heavy, but moving, until we were just about three miles from Victorville. Then it stopped — for hours. We were trapped in a line of cars that barely moved. There were no roads to either side, nothing but desert. We could have turned around but the only other route would have involved circling back and a 90-mile drive. Since we were only a couple of miles from our destination, we figured this mess was bound to clear up at some point. It finally did — three and a half hours later. Turns out it was a four-way stop that was backing everything up. Because, in spite of the massive housing boom Victorville was experiencing, the city fathers hadn’t seen fit to install a traffic light. — Barry

Kicked out of a cab

Arriving into Chicago O’Hare on Christmas evening with my two very young kids, I needed a taxi. When I gave the taxi driver the address, which was only 15 minutes away, he kicked us out of his cab. Too short a fare to make it worth his while, apparently. Keep in mind this was a taxi driver in the taxi line at the terminal arrivals. And he was able to get away with this! Grinch! — Carol