Oops… even celebrities get it wrong sometimes! We’re telling you why Lea Michele and Natalie Portman’s fashions fell short in our weekly feature. Learn from the stars’ sartorial slip ups! 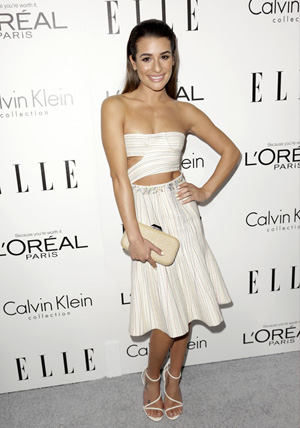 We really don’t mean to pick on Lea Michele, who’s gracefully handled the loss of her late boyfriend and costar Cory Monteith a few months ago. But we’re not jumping for joy at the look the Glee starlet chose for Elle‘s Women in Hollywood Awards this week for a few reasons.

Firstly, the white color and cut of this Calvin Klein dress is off season. This strapless sundress would be much better for a summer soiree than an October red carpet event. The haphazard midriff cutouts also look like a DIY project and they show a lot of skin, but not in a good way. It looks like Lea’s lost a lot of weight since Cory’s tragic overdose, and this draws attention to her thinner than usual frame.

The final verdict? Her white strappy sandals also feel too summery to us and the slicked back hairdo combined with such minimal makeup looks very severe on the star. We definitely applaud Lea’s strength, but not her style choices this time around. 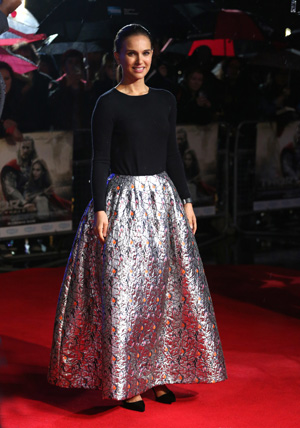 Natalie Portman‘s a hot mama, but you’d never know it by looking at her in this outfit she donned for the London premiere of Thor: The Dark World. The actress covered herself head to toe in Christian Dior, wearing a black cashmere top and sparkly ballroom skirt, both by the designer.

The basic black top looks like something you’d wear grocery shopping and the voluminous skirt adds so much unnecessary bulk to her bottom half. We love maxi skirts but the cut of this one is so not flattering. A long, fitted skirt would look much better.

The final verdict? Natalie’s always been a bit conservative in her style and we understand now that she’s a mom that she may not want to wear anything too revealing. But a bright pantsuit or an elegant black gown would have looked much better, while allowing her to stick to her classy taste in couture. We love her elegant high ponytail though!

22 hrs ago
by Ramisa Tasnim