Stats from the U.S. Fire Administration indicate that over 380,000 residential structure fires occurred in the year 2012, resulting in more than 2,400 deaths. Do you know everything you should about fire extinguishers to avoid becoming an unfortunate statistic? 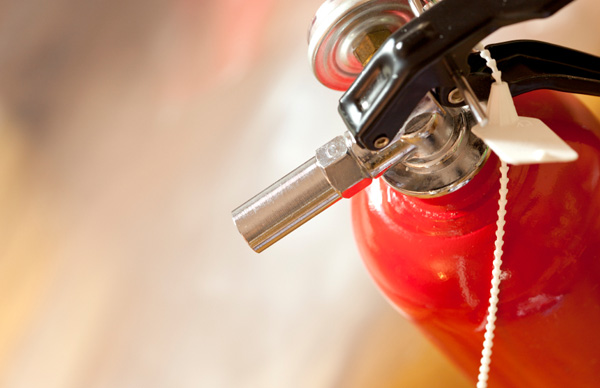 According to the U.S. Fire Administration, more than 380,000 residential structure fires occurred in the year 2012, which sadly led to more than 2,400 deaths. Do you know everything you should about fire extinguishers to avoid becoming an unfortunate statistic?

A fire safety plan is a good start, but fire extinguishers can help end a small problem before it becomes a big one.

How to use a fire extinguisher

A lot of people have fire extinguisher, but do you know how it works? When a fire breaks out, you may only have a few seconds to act, so read the instructions on your extinguisher now. But don’t just read. Make sure your kids know how to use the extinguisher, too, if they’re big enough to hold it. While the instructions for different models may vary slightly, in general, you just have to remember to P.A.S.S.

When you read the instructions on your model, it will tell you what the safe distance is. You can move closer as the flames begin to die down.

This is a generic extinguisher that puts out fires on things like cloth, wood, rubber, paper and many plastics.

If you cook, use or store flammable liquids, you need one of these. It will put out fires involving grease, gasoline, oil and oil-based paints.

Pretty much anything that can be plugged in needs a class C extinguisher, which doesn’t leave the residue some types of extinguishers do.

Multi-class: ABC or BC extinguishers

These combine the functionality of two or more of the other classes and are great for household use — but don’t stop there. You may have special needs, especially if you do certain jobs from home.

Flammable metals are generally only found in factories, but if you work with them at home, you must have a class D extinguisher. This won’t apply to most people.

Where to keep a fire extinguisher

The extinguisher does you no good if you can’t get to it. Keep your fire extinguisher in a place where you’re most likely to need it. It should be easy to reach and should never have other things stored in front of it.

When to use a fire extinguisher

Fire extinguishers should only be used when the fire is small and limited to one area (e.g., the stove or a trash can). They have a limited amount of extinguishing chemicals and may not last long enough to put out fires in a large area. There’s also smoke to consider. If the fire is producing a lot of smoke, you shouldn’t risk passing out from lack of oxygen.

Additionally, you should only use a fire extinguisher after the fire department has been called and you’re sure you have a means of escape if the extinguisher doesn’t work. If the fire is blocking your route, you’re better off spending your time locating another way to safety.

We recommend that you only consider using a fire extinguisher if you’ve been properly trained. You can usually get this training by contacting your local fire department.