If you’re pregnant for the first time, you may be wondering how having a child will affect your relationship with your first baby — your dog. Find out what real people had to say about a dog’s life after Baby. 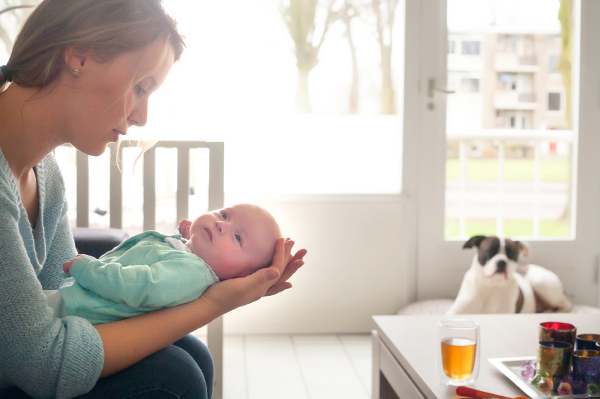 A study released in June 2013 by the University of Veterinary Medicine in Vienna shows that people have a similar relationship with their dogs as do parents and children. We hate to break it to the science-y types in Vienna, but every dog owner in the world already knew that. The Captain Obvious status of the researchers notwithstanding, we wondered: What happens when you have a child?

Fortunately, a lot of people have already been through this, and they had some interesting things to say.

“I still love him so much, but my baby is definitely my first concern… my husband and I try very hard to still give the dog as much attention as we can, walk him when we take the baby out and shower him with extra attention at night when the baby is sleeping.”

Tom had a much more extreme response. Though he’d previously thought people abandoning their dogs when they had children was despicable, he suddenly began to fear his dog could hurt his child and was forced to make a decision he never thought he’d make. They found the dog another good home. While he knows others who’ve had similar experiences, he says others have had an easier transition.

Rebecca had similar fears to Tom’s… at first. They quickly figured out that protecting the pooch from a rambunctious toddler was a more realistic goal.

Naomi notes that her relationship with her dog didn’t change at all, but it was a different story for her husband. He now says he dislikes the animal he once showered with attention. “He [now] refers to him as ‘my’ dog, as in, ‘Your dog has been barking all day.'”

Janet told us that when she brought her first child home from the hospital, her husband took the baby onto the porch to show the dogs. “They turned their heads and didn’t want to look at her,” she says. “Later, they were friendly to her, but I was always struck that they seemed to realize before I did that our relationship would be different.”

How to make it work

There are many reasons a dog owner’s relationship with their fur-baby might change after having a human baby. If you’d like to give yourself the best chance of keeping your pooch after the baby comes, part of the key is making sure Baby and Dog can cohabit with ease. Canine University offers these tips on easing your dog into the transition.

More on dogs and babies

Best dog breeds for new babies
Should you get a dog before or after you have a baby?
Pets: Introducing them to the new baby