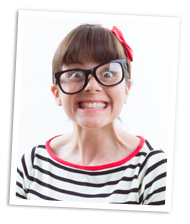 Some of these words may seem like scientific terms, but they’re actually based on the imagination of brilliant sci-fi legends. Some of them are also just random things we say to make you feel inferior. Sorry.

A 20th century subgenre of sci-fi that relates to computing and hackers, and often features large, corrupt corporations as the antagonist.

A “droid” is a human-like robot. It’s obviously a shortened version of android. Think Lt. Cmdr. Data from Star Trek: The Next Generation. Believe it or not, this is a hotly contested word. It was first published in magazines of short science fiction stories in the ’50s, but George Lucas took it “main-geek” (as it were) in the ’70s when he referred to Artoo and Threepio as droids. His Lucasfilms Ltd. has trademarked the term, which you can imagine has caused some issues for a certain smartphone manufacturer.

This sci-fi expletive popularized by the latest Battlestar Galactica has been making the rounds in other nerdy shows, from The Big Bang Theory to Eureka. Believe it or not, it got its start in the original 1978 version of BSG. You can imagine what other four-letter word it’s meant to replace.

All real Star Wars fans know Han Solo shot first in his confrontation with Greedo the bounty hunter at Mos Eisley Cantina (you know, where the weird-shaped blue alien with crazy lips sang). In his revised rerelease of Star Wars: A New Hope, Lucas changed how the scene went, showing Greedo shooting first. That doesn’t sit well with us. Han shot first. Period.

The issue is that Solo’s character was intentionally a maverick from the beginning, so his shooting without provocation made sense. Having him shoot second (a film manipulation using Harrison Ford’s happenstance movements) made the character more “heroic” up front than was actually the case and ruins his anti-hero mystique.

Live-action role play, or LARP, is exactly what you think. Participants dress up as the characters and physically act out their character’s actions. It’s often based on specific settings and moments, like a particular battle of the Civil War or a fictional setting established by the game master. The act of participating in LARP is called larping, and an individual who does it may consider themselves a larper.

First, know the hand signal. Your ring and pinky fingers should be together, but separated in a V from your middle and index fingers (which are also touching). That part, most people get. Under no circumstances should your thumb touch your hand! It must be extended and your palm should be flat, showing no signs of strain. Much like “aloha,” it’s both a greeting and farewell.

Lord of the Rings… All hail Peter Jackson.

Removing the limitations of an Apple device, permitting root access to the operating system, meaning you can run programs that aren’t sanctioned by Apple. This is a dangerous game if you don’t know what you’re doing and may be illegal in some countries.