As exhilarating as traveling is, it can also be rather stressful. From lost luggage to rude flight attendants to having wine spilled all over you on a 9-hour flight to France, it’s never easy. Next time your travel dream becomes a nightmare, keep one of these funny quotes in mind. 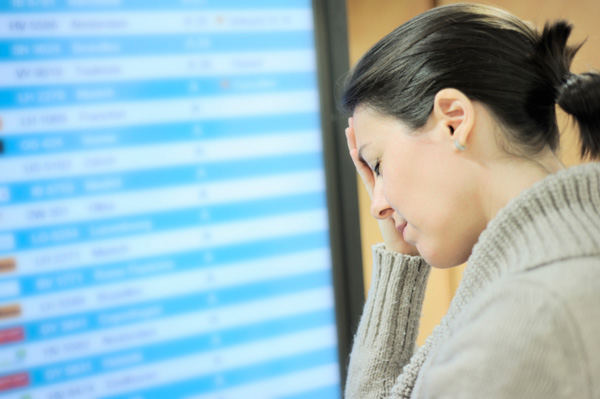 These quotes, told by our favorite comedians, authors, celebrities and travelers, show that even the most stressful of traveling days can be made better with a laugh. Because when life hands you lemons, you ask the flight attendant for three mini bottles of vodka and a packet of stevia.

Getting to the airport/train station

“When preparing to travel, lay out all your clothes and all your money. Then take half the clothes and twice the money”. – Susan Heller

“The shuttle is the worst $20 you’ll ever save. It adds 90 minutes to whatever a Town Car or cab would have been. You have the unenviable choice between being dropped off last or being dropped off first and having a bunch of losers who can’t afford cab fare and have no friends or loved ones with cars knowing exactly where you live.” – Adam Carolla

“I get pretty much all the exercise I need walking down airport concourses carrying bags.” – Guy Clark

“People say there’s delays on flights. Delays, really? New York to California in five hours, that used to take 30 years, a bunch of people used to die on the way there, have a baby, you would end up with a whole different group of people by the time you got there. Now you watch a movie and [go to the toilet] and you’re home.” – Louis C.K.

“What does it mean to pre-board? Do you get on before you get on?” – George Carlin

“In America there are two classes of travel — first class, and with children.” – Robert Benchley

“[Airline food] is the tiniest food I’ve ever seen in my entire life. Any kind of meat that you get — chicken, steak, anything — has grill marks on each side, like somehow we’ll actually believe there’s an open-flame grill in the front of the plane.” – Ellen DeGeneres

“You want to know what it’s like to be on a plane for 22 hours? Sit in a chair, squeeze your head as hard as you can, don’t stop, then take a paper bag and put it over your mouth and nose and breath your own air over and over and over.” – Lewis Black

“Thanks to the interstate highway system, it is now possible to travel from coast to coast without seeing anything.” – Charles Kuralt

“The major advantage of domestic travel is that, with a few exceptions such as Miami, most domestic locations are conveniently situated right here in the United States.” – Dave Barry

“A tourist is a fellow who drives thousands of miles so he can be photographed standing in front of his car.” – Emile Ganest

“The worst thing about being a tourist is having other tourists recognize you as a tourist.” – Russell Baker

“Venice is like eating an entire box of chocolate liqueurs in one go.” – Truman Capote

“Travel works best when you’re forced to come to terms with the place you’re in.” – Paul Theroux

“When you hand someone a camera, why do they act like you just asked them to dissemble a bomb? They take it and they’re like, ‘What do I do… I don’t really… ha-huh…’ Yeah, it’s the button on the top right where it always is since the beginning of #*@! time!” – Dane Cook

“When setting out on a photographic holiday, always provide yourself with two cameras, one to leave in the train going and the other to leave in the cab coming back.” – W.C. Sellar & R.J. Yeatman

“People come back from flights and tell you a story like it’s a horror story. That’s how bad they make it sound. They’re like, ‘It was the worst day of my life. We didn’t board for 20 minutes and they made us sit there on the runway for 40 minutes.’ Oh really? What happened next? Did you fly in the air, incredibly, like a bird? Did you partake in the miracle of human flight you non-contributing zero?’” – Louis C.K.

And our all-time favorite, because we all have people we wish we never would have traveled with.

“I have found out that there ain’t no surer way to find out whether you like people or hate them than to travel with them”. – Mark Twain

Cooking with the French: A cooking class in historic Bordeaux
10 Mistakes to avoid when traveling internationally
5 Expert travel tips